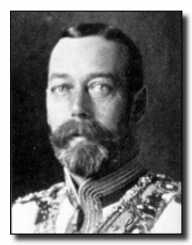 King George V was born as George Frederick Ernest Albert on June 3, 1865, in Marlborough House, London. He was the second son of Prince Albert Edward (Later King Edward VII) and the grandson of Queen Victoria and Prince Albert. His mother Alexandra was the firstborn daughter of King Christian IX of Denmark. George and his elder brother Prince Albert Victor were educated together. Both the brothers failed to excel in their studies, and their father decided that Navy will be the best option for them. Accordingly, they joined the cadet training ship HMS Britannia at Dartmouth, Devon in September 1877.

From 1879, they were on board HMS Bacchante along with their private tutor John Neale Dalton. They toured the overseas British colonies extensively including the Caribbean, Australia and South Africa. They also visited Norfolk, Virginia, South America, Egypt, East Asia and the Mediterranean. The brothers returned home after three years of globetrotting. Upon their return, Queen Victoria was aghast to see that his two grandsons could not speak French or German.

The two Royal brothers were immediately sent to Lausanne for a six months course to learn the languages. The training proved to be largely unsuccessful as the duo failed to learn the required languages. George’s elder brother Albert Victor was then sent to Trinity College, Cambridge, while George was allowed to continue in the Royal Navy. He travelled far and wide throughout the world visiting the British Colonies spread along the length and breadth of the globe commandeering the naval ships under his possession during the tenure of his maritime career. After the conclusion of his active service in Royal Navy, he was given an honorary rank in the organization in his later life.

George was third in line to succeed to the throne after his father and elder brother. Just six weeks down the line of his formal engagement, Albert Victor, George’s brother died of pneumonia on January 14, 1892. The untimely death of his elder brother brought George second in line to the throne. George left the Royal Navy and was given the title Duke of York. He also became a member of the House of Lords.

On January 22, 1901, Queen Victoria died. George’s father ascended the throne as King Edward VII. Simultaneously, George inherited the title Duke of Cornwall and Duke of Rothsay. On November 9, 1901, George was designated Prince of Wales and Earl of Chester. Queen Victoria hadn’t given much importance to his son Edward and had intentionally kept him out from the State affairs. On the contrary, King Edward VII allowed George full access to essential State documents

On May 10, 1910, King Edward VII died. George succeeded him to the throne and was titled King George V. The inheritance to the throne was not at a best of an opportune moment. House of Lords had rejected the people’s budget the previous year breaking a common belief that Lords did not veto money bills. A General Election was held in January 1910, and the conservative peers allowed the passage of the budget.

The World War I broke out in July 1914. George V strived hard to support the troops personally. He visited the war front and military hospitals frequently. During one such visit, his horse rolled over him injuring him severely. His pelvis got fractured and remained painful for the rest of his life.

After the Bolshevik revolution, Tsar Nicholas II of Russia, George’s first cousin, was overthrown during the Russian Revolution of 1917. It was rumoured that under the political circumstances George was opposed to the offer of political asylum already extended to Tsar Nicholas II and his family by the British Government. As a result, they were never rescued, and in 1918, the Tsar and his immediate family were murdered by the Bolsheviks. Nicholas’s mother (George’s Aunt) and the other members of their extended family were later rescued from Crimea by British Ships.

George V was regarded as one of the few European Monarchs, who survived the World War I unscathed primarily due to his pro-people policies.

King George V married his German cousin Princess Victoria Mary of Teck on July 6, 1893, at the Chapel Royal in St James's Palace, London. She was nicknamed ‘May’ after her birth month and was formally engaged with George’s elder brother Albert Victor six months before his death. Queen Victoria regarded Princess May as a suitable match for her grandson, and both George and May were allowed to come closer during their shared period of grief.

George and May led a happy conjugal life together. George never took any mistress all his life and remained devoted to May. The couple had five sons and a daughter: Prince George, Prince Albert, Prince John, Prince Edward and Princess Mary. Their youngest son, Prince John died at the age of 13 due to seizures suffered due to his deteriorating condition of epilepsy. His eldest son Edward was not according to his liking and was considered wayward. So, when Prince Edward abandoned his claim to the throne, King George V happily crowned Prince Albert as future King George VI.

King George V died on January 20, 1936. He already had a breathing problem after his unfortunate fall from horseback in 1915. He was a heavy smoker, and by 1925 he was diagnosed with Chronic Obstructive Pulmonary Disease (COPD). His condition worsened with the passage of time, and the end came after receiving an injection of morphine and cocaine by the Royal doctors, administered with an aim to relieve him from the grueling pain he was facing due to grave illness. He was interred at St George's Chapel, Windsor Castle on 28 January 1936.