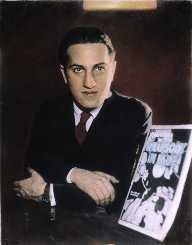 George Gershwin was born in Brooklyn New York on the 26th of September 1898. He was the second son of Russian-Jewish immigrant parents, Morris (Moishe) Gershowitz (father) and Rosa Bruskin (mother). His siblings were Arthur, Frances and his older brother Ira, a famed lyricist with whom he worked over the years. His family name had been changed to Gershvin when they immigrated into the United States in 1898. George changed the name to Gershwin when he became a professional musician.

George as a youngster was oblivious to his own musical aptitude and showed interest rather in sports. This changed when he attended a friend, Maxie Rosenweig’s violin recital in school. There his interest were turned to music. When he was eleven years old, his musical talent became apparent to his parents when he started to play music with the second hand piano they had bought for his older brother. To encourage and help improve him, George’s parents started to get him music tutors. One of his tutors, Charles Hambitzer, a pianist in Beethoven symphony orchestra, was so impressed with him, he offered to tutor him for free. He was further trained over the years by other tutors like Henry Cowell, Walling Ford Riegger, Edward Kilenyi, and Joseph Schillinger.

At age fifteen, George quit school and got jobs at several New York nightclubs where he started to play music professionally. To add to his earnings, he got a job at the Remick Music Publishing Company as well. He was a song plugger for the New York Tin Pan Alley, working as demonstrator of sheet music. With the practice and opportunity afforded him in this occupation, he tried his hand at his own compositions and even added his own innovations along the way. He also worked at the Aolian Company and Standard Music Rolls where he spent time recording and arranging music rolls. He likewise took the opportunity here to cut his own rolls in his own name and under aliases.

He composed his first piano solo in 1915 titled ‘When You ‘Em You Can’t Have ‘Em When You Have ‘Em You Don’t Want ‘Em’.  Here he demonstrated some of the new techniques he had been trying his hands at. Although this earned him only five dollars, it was the beginning of his journey into establishing himself firmly as an American pianist and composer of repute.

In 1917 Gershwin got a job as a rehearsal pianist on Broadway and quit Remick’s.  In May 29, 1919 ‘La La Lucille’ opened at the Henry Miller Theater as George’s first complete Broadway Musical composed by him. This milestone got him a publishing contract from Max Drefus of TB Farms Co.

In the same year 1919, George composed the popular American song ‘Swanee’, whose lyrics were supplied by Irving Ceaser. In 1920 Swanee became a hit when it was performed by the then celebrity singer and comedian Al Jolson in his hit show Sinbad.

In 1928 George Gershwin composed the poetic orchestral composition, an ‘American in Paris’. It was inspired by his time and experience in Paris. It is one of his most popular compositions and it has influenced the culture of orchestras till date. The old fashioned taxi horns used in the piece are still being used in modern orchestras.

George’s brother Ira collaborated with him as his lyricist in many of his vocal and theatrical compositions. In his own right, Ira was celebrated for being an original, comic and witty writer. Together they composed about seven hundred songs for Broadway shows and films. Notable amongst them are ‘Lady Be Good’, ‘Of Thee, I sing’, ‘Hang On To Me’ and ‘Oh Kay’.

George Gershwin also used his musical compositions to express his ire against the politics and social issues of his time. This was evidentin musicals like ‘Strike Up The Band’, ‘Of Thee, I Sing’, ‘And Let ‘Em Eat Cake’

His ‘Rhapsody In Blue’jazz composition was rumored to have been an unintentional genius. He had promised to bring a new composition to the ‘An Experiment In Modern Music’ concertscheduled to hold on the 12th of February 1924. He had been asked to compose something that will improve the integrity of jazz music. It appeared George had forgotten all about it. He had seen a newspaper feature that promised something new from him at the concert. Thus reminded of his commitment, he went into a hurried frenzy to create a befitting composition in time for the concert. When it premiered, Rhapsody In Blue was a hit

In 1933 George Gershwin contacted Dubose Heyward about his desire to convert his 1926 bestseller novel ‘Porgy’ into music. The writer then encouraged George to visit South Carolina where the novel was set. At the end of the year, 1933 and the in 1934 George visited the Folly Islands South Carolina where he began to immerse himself in the musical culture, spirituals, folk culture, language and local culture of the area. In 1935 ‘Porgy And Bess’, a collaboration between George, Ira, and Heyward, was performed with an all-African- American cast. This was a very controversial move at the time and opera composition’s road to popularity was not a smooth one.

After this, George moved to the Hollywood Hills Los Angeles, California along with his brother Ira. Together, they composed the music and lyrics for the filmproduction by RKO Studios titled ‘Shall We Dance’starring Fred Astaire and Ginger Rogers. It was released in May 1937. And another musical comedy ‘A Damsel In Distress’ loosely based on a novel by P.G wood house, alsostarring Fred Astaire. While working on ‘Goldwyn Follies’ the Technicolor film produced by Samuel Goldwyn in July 1937, George collapsed and was never able to return to the set. It was released February 1938

George got his first academy award nomination in 1937 for ‘They Can’t Take That Away From Me’.

The composition‘Of The I Sing’ by the Gershwin brothers was the first musical to win a Pulitzer prize. This was also in 1937.

Several awards followed after his death. Beginning with the Academy award for best music song for ‘Shall We Dance’ in 1938

His influence in the American music, jazz, Orchestra, theater, and Broadway Musicals have left permanent marks.

Several legendary singers and performers have done covers of his songs over the years. These include the likes of Frank Sinatra, Louis Armstrong, Ella Fitzgerald, Dean Martin, Amy Winehouse, and several even more contemporary singers. His pieces are still subject of several Broadway, theater, Ballet, and musical shows and tours till date.

George Gershwin was very dedicated to his craft. He always found new and innovative improvements to his chosen genre. He never stopped learning and he even helped mentor some younger generation musicians. It was however said by those closest to him that he suffered his fair share of insecurity coupled with an insatiable desire for approval.

He had a vibrant social life with an impressive celebrity-filled circle of friends.

When he was not busy with music, he transformed into an amateur painter. His art received some accolade and he did several portraits for his friends.

George Gershwin never married. He had a long-term relationship with Kay Swift which resulted in the dissolution of her marriage. After his death, she collaborated with Ira to complete his unpublished works.

While working on the set of the Goldwyn Follies, George collapsed and lapsed into a coma from which he never recovered. He had earlier in the year been complaining of headaches and strange smells. As the year wore on, his symptoms deteriorated into frequent memory blackouts, and such weakened motor skills that he needed assistance to move about. He was diagnosed with malignant brain tumor while in the coma. He died during surgery at the Cedars of Lebanon Hospital on the 11th of July 1937

George Gershwin’s sudden death at the peak of his career was one that was hard for many to believe or accept. However, his inerasable mark had been made and is still evident in classical and contemporary music.