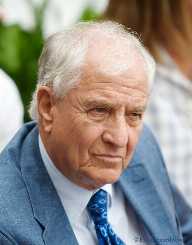 Garry Marshall was an American director, producer, actor, and screenwriter. He produced some of the most popular television shows in the 1970s, as well as numerous films.

Garry Kent Marshall was born in New York City on November 13, 1934. His entire family was involved with entertainment. His father Anthony directed industrial films. His mother Marjorie owned a tap dance school. Penny, one of his sisters, went on to become an actress. Ronny, the other sister, became a casting director. He graduated from the De Witt Clinton High School in The Bronx. He then started studying journalism at Northwestern University. He was a columnist for the high school newspaper. After graduation, he spent two years serving in the U. S. military during the Korean War.

Marshall's career began when he started writing jokes for comedians such as Phil Foster and Joey Bishop. He also worked for the Tonight Show With Jack Paar.

In 1961, Marshall moved to Hollywood and started writing episodes for television shows. He partnered up with fellow writer Jerry Belson. Together they wrote some episodes for sitcoms such as The Dick Van Dyke Show, The Joey Bishop Show, The Lucy Show, and many others. Together they also created the popular show The Odd Couple, based on a play by Neil Simon.

The most successful period in Marshall's television career came in the 1970s. His most iconic show was Happy Days. The main character in this sitcom is the teenager Richie Cunningham. The show depicts his life and his relationships with his parents, his siblings, and his friends.

Marshall's second most famous show was Laverne and Shirley. This sitcom was actually a spin-off of Happy Days. It revolves around the lives of roommates Laverne DeFazio and Shirley Feeney. In Happy Days, these two were shown as the friends of one of the characters. The character of Laverne was actually portrayed by Garry's sister Penny Marshall.

Marshall's film producing career began in 1968. He co-wrote the film How Sweet It Is together with Jerry Belson. In 1982, he made his debut as a director, with the Young Doctors in Love. Over the years he continued creating films and casting famous stars such as Tom Hanks, Goldie Hawn, Al Pacino, and many others.

The most well-known film Marshall ever directed was Pretty Woman. This romantic comedy, starring Richard Gere and Julia Roberts, was released in 1990. It tells the story of the relationship between a wealthy businessman and a prostitute. The film went on to become a box office hit.

Marshall's second most successful film was the comedy called The Princess Diaries. It was released in 2001 and it starred Anne Hathaway and Julie Andrews. The film talks about a teenage girl who finds out she is the heir to the throne of the fictional Kingdom of Genovia. Its sequel was released three years later.

Apart from film and television, Marshall also worked with other forms of entertainment. He wrote plays like The Roast and Wrong Turn at Lungfish. He also directed operas, including The Grand Duchess and The Elixir of Love.

Marshall also got a few small acting roles in television shows and films. He appeared in the films Lost in America, A League of Their Own, Soapdish, On the Lot, and others. He had guest appearances in shows such as Monk, Two and a Half Men, ER, and the Sarah Silverman Show. He also voiced some characters in a few episodes of the Simpsons. Much like with directing and producing, he preferred to act in comedies.

In 1995, Marshall wrote his biography Wake Me When It's Funny, together with his daughter Lori. In 2012, he published his memoir, My Happy Days in Hollywood.

Garry Marshall passed away on July 19, 2016, in a hospital in California. He suffered from a stroke and pneumonia.