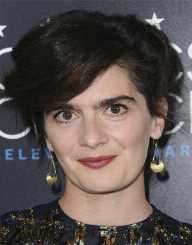 Trying To Find Her Relationship to Acting: Gaby Hoffmann

American film and television actress Gabrielle Mary Hoffmann was born on January 8, 1982, in Manhattan, New York City, New York. Her mother Viva Hoffmann was an American writer, actress, and an ex-Warhol superstar. Her father Anthony Herrera was a soap opera actor who is best remembered for his role as James Stenbeck in ‘As the World Turns’. Her parents got separated shortly after her birth. Gaby’s mother raised her as a single parent along with her older step-sister Alexandra. She spent her early years in the notoriously famed Chelsea Hotel of New York.

At the age of 4, Gaby Hoffmann with her hereditarily acquired acting skill started acting in commercials to help her mother in paying the family bills. She initially attended a public school on Hudson Street as part of her elementary education. She was then shifted to another school situated in the Hell’s Kitchen area. She was enrolled at the Buckley School in 1994 when they relocated to Los Angeles. She graduated from Calabasas High School in 1999. Her birth was documented in Brigid Berlin’s ‘Andy Warhol Diaries’. A children’s book was also written based on her stay at the Chelsea Hotel titled "Gaby at the Chelsea".

Gaby Hoffmann attended Bard College after her high school graduation. She graduated from the college in the year 2004 with a degree in literature.

Gaby Hoffmann started her acting career as early as at the age of 4. After appearing in some commercials, she burst into the limelight as a child actress in 1989 in two consecutive movies titled ‘Field of Dreams’ and ‘Uncle Buck.’ She appeared in many movies during her early teens including ‘Now and Then,’ ‘This is My Life,’ ‘Everyone Says I Love You,’ ‘Volcano,’ ‘The Man without a Face’ and ‘Sleepless in Seattle.’ Among these films, she was appreciated for her acting in ‘Now and Then,’ ‘Sleepless in Seattle’ and ‘Volcano.’

Her portrayal of the character Stephie in the film ‘200 Cigarettes’ (2000) confirmed her acting prowess further and firmly positioned her place in the Hollywood film industry. Gaby Hoffmann continued in the same vein and attracted more eyeballs with her acting in movies like ‘Coming Soon’, ‘Black and White’, ‘You Can Count on Me’, ‘The Hairy Bird’, ‘Snapped’ and ‘Perfume’. ‘Coming Soon’ was a kind of girls-on-top sex comedy which further enhanced her image as a sex-siren. All these films were made during teen and college years from 1996 to 2003.

From 2003 onwards until 2007, Gaby Hoffmann mostly concentrated on her theatre career and appeared in a number of theatres in New York including ‘24 Hour Plays’, ‘The Sugar Syndrome’, ‘Third’, ‘Law and Order: Criminal Intent’ and in the Broadway play ‘Suburbia’. She returned to Hollywood in 2007 and resumed her film career with the film ‘Severed Ways: The Norse Discovery of America’ in the same year. In 2008, she starred in a documentary titled ‘Guest of Cindy Sherman’.

In the same year, Gaby Hoffmann appeared in another documentary called ‘Chelsea on the Rocks’. The film deals with the life of many celebrities and artists who had emerged from the famed residence. She appeared as a supporting cast in the film ‘Life During Wartime’, released in 2009 as well as appeared in a thriller called ‘13’. In 2013, she appeared in the film “Crystal Fairy and the Magical Cactus”. During 2014, she made herself too busy appearing in as many as six movies including ‘Veronica Mars’, ‘Obvious Child’, ‘Goodbye World’, ‘Manhattan Romance’, ‘Lyle’ and ‘Wild’.

Of late, Gaby launched her television career since the beginning of 2014. She landed a recurring role in Lena Dunham's sitcom ‘Girls.’ She earned an Emmy Award nomination in 2015 for her role in the sitcom. She appeared as a supporting cast in the Amazon series ‘Transparent’ in the same year. The show won rave reviews from critics and audiences alike and won seven Emmy Awards nominations in 2015 including that of Gaby.

Way back in 1994-95, Gaby Hoffmann happened to act in some television assignments including her own short-lived sitcom ‘Someone Like Me’, aired on NBC which lasted for only six episodes. She appeared in the publicity shows for her sitcom which included late-night talk shows ‘The Tonight Show with Jay Leno’ and ‘Late Show with David Letterman’. In 1995, she played the character of Andrea Edgerton in the CBS TV film ‘Whose Daughter Is She?’

Gaby Hoffmann won the Young Artist Award in the category of Best Young Actress Supporting Role in a Motion Picture for her stellar performance in “Field of Dreams” in 1990. She was nominated for the award in the same category twice later in 1993 and 1994 for her performance in the films ‘This is My Life’ and ‘The Man Without A Face’ respectively. Again, she was nominated for the same award in 1995 and 1996.

Gaby Hoffmann has never married till date. However, she is in a relationship with her cinematographer boyfriend, Chris Dapkins since 2012. They raised a child together in November 2014. She is a baby girl named Rosemary. They stay together in an apartment in Fort Greene section of Brooklyn, New York, United States.