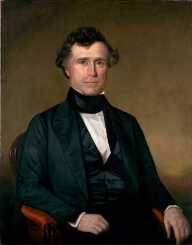 Franklin Pierce was an American lawyer turned politician who became the 14th president of the United States of America.

Franklin Pierce was born to Benjamin and Anna Kendrick Pierce on November 23, 1804, in New Hampshire. He was the fifth of the eight children born in the family. His father was a revered politician and governor of New Hampshire.

He started his early education in the public Hillsborough Center School. He completed his elementary education at the private Philips Exeter Academy. In 1819 he joined Bowdoin College in Maine. He graduated in 1824.

After his graduation from Bowdoin, he went to study law with different institutions. Pierce first studied law under a family friend Levi Woodbury. In 1826 he went to Northampton Law School in Massachusetts and left the following year. In 1827 he studied under the tutelage of Judge Edmund Parker in New Hampshire. Pierce passed his bar entry exam and was given his practicing license in the fall of 1827. He formed a legal firm with his partner Albert Walker in his hometown Hillsborough. Pierce gradually rose to prominence as a formidable lawyer.

He joined elective politics at the tender age of 24. In 1829 he vied and won a seat in the New Hampshire State Legislature. In 1831 he became the State House Speaker, presiding over the legislature under his father who was the state governor. He rapidly rose in the local politics, due to his charm and eloquence, and partly because of his father’s influence.

Pierce won the seat to Congress and served for two terms until 1837. He won the Senatorial seat in 1867. Pierce served for one term as the New Hampshire Senator. He resigned from the Senate in 1842 at the behest of his wife. He went back to New Hampshire to pursue his legal career.

Pierce was popular within the Senate with many senators from the slave-owning southern states. Though he came from the north where slavery was loathed, Pierce proved himself as a pro-slavery senator.

He volunteered to join the army in the Us-Mexico War which erupted in 1846. In 1847 Pierce became a Brigadier General, having risen from a private when he enlisted. He was part of the US troops that captured Mexico City forcing the Mexicans to surrender in 1847. When the war ended, He returned to New Hampshire.

Pierce favored the southern states in the issue of slavery. He seemed to waver on the Missouri Compromise of 1850. In this treaty, the Americans demarcated the boundary lines of slavery in the country. Despite the slavery controversy, he enjoyed relative economic tranquility.

On the international front, Pierce managed to force the Japanese to open up their market for the Americans in 1854. He signed the Ostend Manifesto in Belgium with Spain, Britain, and France. In the treaty, the US got the right to invade Cuba if it felt threatened by activities on Cuban soil.

In 1854 Pierce signed the Kansas-Nebraska Act. Kansas and Nebraska became fully fledged states of the US. Pierce gave the two states the right to determine the slavery issue and not the US Congress. In the 1855 elections, pro-slavery voters won in Kansas. Disgruntled Democrats joined hands with members of the Free Soilers and other people of the defunct Whig Party to form the Republican Party. At the end of his first term in office, he faced a rebellion within his Democratic Party. In 1856 the Democrats unanimously denied him the presidential party ticket instead nominating James Buchanan. Buchanan won the US presidential elections in 1856. Pierce stayed in Europe for a while and came back to the US.

Pierce married his wife Jane Appleton on November 19, 1834. The couple got three children, two died in their infancy. The third died at the age of eleven. Unlike Pierce, Jane was shy, religious and constantly ailing. She kept away from the public.

Franklin Pierce died on October 8, 1869. He was buried at the Old North Cemetery in Concord, New Hampshire.

He is the only sitting president to be denied party nomination for reelection in the US.