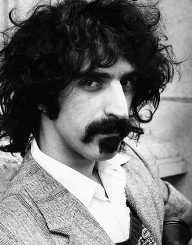 Frank Vincent Zappa was a prominent and highly revered American musician and composer. Born on December 21, 1940, he was also a filmmaker and social activist. Frank Vincent Zappa whose career spanned for about three decades composed in a variety of genres including pop, jazz, rock, misique concrete and orchestral works. Frank Vincent Zappa was known as a nonconforming artist with his works characterised by sound experiments, a satire of the American culture, and free-form improvisation. Throughout his musical career, Frank Vincent Zappa released more than 60 albums with his band the Mother of Invention and as a solo artist.

His debut album with the band was ‘Freak Out’. The talented musician is regarded as one of the most innovative rock musicians among his peers. Aside from music,Frank Vincent Zappa designed album covers and produced music videos and feature-length films. In 1995, he was inducted into the Rock and Roll Hall of Fame and received a Grammy Lifetime Achievement Award in 1997.

After dropping out of college, Frank Vincent Zappa left home for Los Angeles where he met his future wife Kathryn J. "Kay" Sherman in 1959. They lovers later moved to Ontario where Frank Vincent Zappa worked for an advertising agency for a short period. Frank Vincent Zappa then ventured into music performing in nightclubs. Some of his recordings at this time were The World’s Greatest Sinner, 1962 and Run Home Slow in 1965. Frank Vincent Zappa also wrote and produced songs for artist like Ray Collins and producer Paul Buff. He also performed at local bars as a guitarist with the ‘Muthers’ to earn a living.

The Mothers Of Invention

Frank Vincent Zappa joined the local R&B band the Soul Giants as a guitarist after an invitation by Ray Collins. He soon became the co-lead singer. The band later became the Mothers and worked with manager Herb Cohen that increased their bookings. In 1966, the band had a record deal with the Verve division of MG signed by record producer Tom Wilson. On the demand of Verve, the band revised its name to Mothers of invention. That same year, the band recorded it's debut album Freak Out!, which became the second rock double album ever released after Bob Dylan’s Blonde on Blonde. The album was a fusion of R&B, musiqueconcrete, experimental sound collages, and doo-woop. Zappa took control over most aspects of the recording. The Mothers of Invention’s second album titled Free was released in 1967. That same year Frank Vincent Zappa recorded Lumpy Gravy, under his own name and released by Capitol Records. The album was later pulled out of the market due to contractual problems.

The album was worked on and new content added while others were restructured and later released by Verve in 1968. The band’s next album was We’re Only in it for the Money, 1968 produced by Frank Vincent Zappa and was a huge hit. After this album, Zappa took over all album productions of Mothers of Invention. Other albums by the band include Cruising with Ruben & the Jets, 1968. Frank Vincent Zappa disbanded the band in 1969 citing financial problems, as he had to support the band himself from his publishing royalties.

Frank Vincent Zappa followed it with the double-album soundtrack to the movie 200 Motels (1971), which also featured Mothers and Royal Philharmonic Orchestra among others. His albums include Apostrophe, Over-Nite Sensation, Roxy & Elsewhere and One Size Fits All

In 1970, Frank Vincent Zappa formed a version of Mothers mostly with (of Inventions) with drummer Aynsley Dunbar, keyboardist George Duke, Ian Underwood, Jeff Simmons, and members of the Turtles including singer Mark Volman, bass Player Jim Pons, and Howard Kaylan. Frank Vincent Zappa toured with the band and released albums like Fillmore East – June 1971 and Just Another Band from LA.

In 1979, Frank Vincent Zappa released Sheik Yerbouti, which became the bestselling album of his career. Released under Zappa Records, it contained the single Dancin’ Floor that earned nominations at Grammy and peaked at No. 45 on the Billboard charts. Other works include Tinsel Town Rebellion, 1981; You Are What You Is, Shut Up n Play Yer Guitar, Ship Arriving Too Late to Save a Drowning Witch that contained the hit song Valley Girl. Valley Girl received a nomination for a Grammy and peaked at No. 32 on the Billboard charts. He released Jazz from Hell in 1986 winning a Grammy Award for Best Rock Instrumental Performance in 1988. Zappa released more than 60 albums with his band Mothers of Invention and as a solo artist. Some albums were also posthumously released by his widow.

Frank Vincent Zappa married twice first to Kathryn J. Sherman in 1960 but divorced in 1963. He then married Adelaide Gail Sloatman in 1967. They had four children namely Moon, Dweezil, Ahmet, and Diva. Zappa battled prostate cancer and died of it on December 4, 1993, at his home with his family. He was interred at the Westwood Village Memorial Cemetery.

Many scientists have honored Frank Vincent Zappa by naming their discoveries after him. In 1995, he was inducted into the Rock and Roll Hall of Fame with a citation reading, "Frank Vincent Zappa was rock and roll's sharpest musical mind and most astute social critic. He was the most prolific composer of his age, and he bridged genres—rock, jazz, classical, avant-garde and even novelty music—with masterful ease". He also received Grammy Lifetime Achievement Award in 1997.