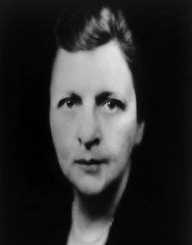 American politician and the first woman to hold a Cabinet post in the United States, Frances Perkins was born Fannie Coralie Perkins into a middle-class Republican family. Her ancestors were mainly farmers and craftsman who had lived in Maine for several generations. Her family relocated to Worcester, Massachusetts when she was two years old.

Educated at Worcester Classical High School, Frances Perkins then studied at Mount Holyoke College for a B.A. (1902). She enrolled at Columbia University in 1909 and obtained an M.A. in sociology and economics (1910).

Frances Perkins was working for the Factory Investigation Commission in New York City when she witnessed the horror of the Triangle Shirtwaist Factory Fire when 146 people lost their lives trapped on the upper floors of a tenement building. Already aware of the problem with factory conditions and workers rights, she was determined to get involved and ensure that it would not happen again. Initially, she joined the Socialist Party but by 1912, voted for Woodrow Wilson.

Frances Perkins was appointed to the New York State Industrial Commission in 1918, the first female member. By 1926, she was the chair of the commission. And in1929, the governor of New York State, Franklin D. Roosevelt, offered her the position of the Industrial Commissioner of New York state. She used her position to continue with factory investigations, unemployment insurance laws, reduced working hours and a minimum wage.

When Franklin D. Roosevelt was elected President of the United States, he appointed Frances Perkins as his Secretary of Labor (1932-1945). Perkins remained Roosevelt’s Secretary of Labor for 12 years which included the challenging years of the Great Depression. The programmes and reforms she contributed towards included social security for the American people.

Reforms she was involved with include the Wagner Act, which allowed collective bargaining and workers the right to organise trade unions; the Fair Labor Standard Act and the Social Security Act.  In 1945, Perkins was chosen to lead the U.S. delegation to the International Labor Organization conference held in Paris, France.  She was then appointed to the United States Civil Service Commission and remained there until 1952.

Frances Perkins' pro-labor stance brought her into conflict with some conservatives, and in 1939, an impeachment resolution was brought against her by the House Un-American Activities Committee because of her refusal to depart the head of a union, Harry Bridges. Bridges was an Australian born American trade union leader.
The charges against Perkins were dropped, due to lack of evidence against her.

Frances Perkins joined Cornell University’s School of Industrial and Labor Relations in 1958 and continued lecturing there until 1965.

Frances Perkins was inducted into the National Women’s Hall of Fame posthumously in 1982.
In the late 1980s, the U.S. Department of Labor nominated Perkins the 1989 Labor Hall of Fame Honoree. Perkins was honoured by The Frances Perkins Building, headquarters of the U.S. Department of Labor in Washington D.C. being named after her (1980). Her family home in Maine is a National Historic Landmark, as it the Washington home she lived (1937-1940).

In Maine, The Frances Perkins Center operates as a non-profit providing information on her work, hostings events and putting on exhibitions about her life and achievements. The centre is also responsible for the preservation of the Perkins family homestead.

Frances Perkins married economist Paul Wilson in 1913, and they had a daughter Susanna who was born in 1916. Wilson later had a nervous breakdown caused by what is today thought by some to have been a case of undiagnosed bipolar disorder. Frances Perkins died on the 14 May 1965.