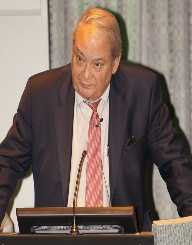 Ferid Murad was born on September 14, 1936. He is an American physician and pharmacologist. In 1998, he won a share of the Nobel Prize in Physiology or Medicine for the discovery that nitric oxide acts as a signalling molecule in the cardiovascular system of mammals.

Ferid Murad was born on September 14, 1936, in Whiting, Indiana. He was born to Jabir Murat Ejupi and Henrietta Bowman. He was brought up alongside two brothers. He was an intelligent and hardworking student when he was in school. He tried to learn as much as possible from the education that he got. After graduating high school, he wanted to enrol for a medical course, but his family did not have the funds. Ferid started looking for scholarships that would allow him take a course in medicine. He later earned a Rector Scholarship as the DePauw University in Greencastle. In 1958, he received his undergraduate degree in chemistry. After graduation, he joined a new MD-PhD program at Case Western Reserve University. In 1965, he earned his MD and pharmacology Ph.D.

In 1965, he interned in Internal Medicine at Massachusetts General Hospital. In 1966, Ferid served as Resident in Internal Medicine. In 1967, he moved to the National Institutes of Health as a Clinical Associate and Senior Assistant Surgeon. He later researched for three years in Martha Vaughan’s Laboratory.  In 1970, he became an associate professor at the new clinical Pharmacology Division in the Department of Medicine and Pharmacology. In 1971, he became the director of their Clinical Research Centre. Two years later he became the director of Clinical Pharmacology. In 1975, he became a full professor.

During the 1970s Ferid researched on cyclic guanosine monophosphate along with other scientists. They conducted experiments with the biological effects of nitric oxide. In 1977, he was able to show that nitroglycerin and other related heart drugs induce the formation of nitric oxide. His work formed the basis of works of scientists such as Robert F. Furchgott and Louis J. Ignarro. In 1981, Murad became the Chief of Medicine at the Palo Alto VA Medical Centre, Stanford University. He held the position until 1986. In 1986, he became the acting Chairman of Medicine until 1988.

In 1988, he left Stanford and became the Vice President of Pharmaceutical Discovery at Abbott Laboratories. In 1993, he founded the Molecular Geriatrics Corporation, his own biotechnology company. Ferid acted as the President of the company. The company was however not successful. In 1977, he returned to academics where he joined the University of Texas Medical School at Houston. He joined to form a new department of integrative biology, pharmacology, and physiology. At the University he held posts such as Professor, Director Emeritus of the Brown Foundation Institute of Molecular Medicine for the Prevention of Human Disease and Deputy Director of The Brown Foundation Institute of Molecular Medicine among other posts. In 2011, he was appointed professor in the Department of Biochemistry and Molecular Biology at the George Washington University.

In 1996, he won the Albert Lasker Award for Basic Medical Research with Robert F. Furchgott. In 1998, he won the Nobel Prize in Physiology or Medicine with Robert F. and Louis J. for their discoveries concerning nitric oxide as a signalling molecule in the cardiovascular system.

In 1958, Ferid Murad married Carol Ann Leopold, an English and Spanish major at DePauw. The couple has five children, four daughters, and a son. He is regarded as one of the physicians who contributed a lot to science. He is currently eighty years old.