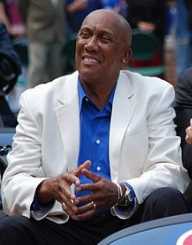 Ferguson Arthur Jenkins better known as Fergie Jenkins was born on December 13, 1942, in Chatham, Ontario, Canada. His parents were of different origins. Ferguson Jenkins Sr., father of Fergie Jenkins was the son of emigrants from Barbados. He eked out his living by working as a Chef and chauffeur. Fergie’s mother Delores Jackson hailed from a family whose ancestors were former American slaves. They fled to Canada using the Underground Railroad connecting the two countries and eventually settled in Southwestern Ontario. Both Fergie’s parents were strongly built and possessed athletic prowess. Besides being an amateur boxer, his father represented Chatham Coloured All-Stars as a semi-professional baseball player.

While growing up in Chatham, Ontario, Fergie showed his talent in different areas of sporting activities. During his school years, he took part in various track and field events, ice hockey and basketball and proved his mettle in each of these sports. He started playing bantam baseball as a first baseman during his teenage years. Fergie trained hard to shoulder the responsibility of a good baseball pitcher. He sharpened his throwing skills by practicing at a local coal yard. He used to throw coals targeting either the gaps of a passing boxcar or honed his skill by throwing at an open ice chute. Fergie got the assistance of Gene Dziadura, a Philadelphia Phillies scout and former shortstop in the Chicago Cubs minor league system. Dziadura worked on Fergie’s pitching skill until he completed his high school education.

Fergie signed to play for the Philadelphia Phillies in 1962. In 1965, he made his debut appearance in the Major League Baseball (MSB) as a relief pitcher for his parent club. In the following season, he was traded to the Chicago Cubs, a club where he spent most of his playing career. Thereafter, in 1967, he played first time for the full year turning up as a starter for the Cubs. His exploits on the field of Major League Baseball League earned him a second place finish in the Cy Young Award Voting. He won the award as a tie with another promising baseball player. For the first time in his nascent career, he found place in the All-Star Game due to his excellent display of skills in that year.

He improved his game further in the following season. The year 1971 happened to be the career-best season for him. Turning up for the Chicago Cubs, he almost single-handedly won most of the games of MSB that season. His golden run in that season ensured him two coveted awards. The first one was the declaration of his name as the NL Player of the Month. He earned the honour for the only time in his illustrious career. The second one was his winning the NL CY Young Award. He became the first Canadian as well as the first Chicago Cub pitcher to have won the award.

Fergie played for the Chicago Cubs until 1972. He recorded his sixth straight season with 20 or more wins. In 1973, Texas Rangers signed him, trading him off from the Chicago Cubs. The following season, Fergie achieved his personal best record of 25 wins. It is a Texas Ranger franchise record which is still unbeaten. In the Cy Young Award vote, he finished second recording a close contest with eventual winner Catfish Hunter. Following his fifth-place finish in the MVP leader board, he won the AL Comeback Player of the Year in 1974 season.

On May 23, 1980, Fergie recorded his 250th win in his MSB career. Shortly after that, he was found in possession of 1.75 grams of marijuana, 3.0 grams of cocaine and 2.2 grams of hashish while undergoing a routine customs search in Toronto airport. Consequently, Commissioner Bowie Kuhn suspended him for an unspecified period. However, within two weeks of his suspension, an independent arbiter managed to reverse his suspension order. He immediately resumed his club career. In the ensuing trial, the court discharged him citing paucity of credible evidence.

Fergie retired from playing in MSB in 1983. However, he continued to play in the professional baseball league of Canada. He tried his hand in politics too. In the 1985 Ontario General Election, he contested on behalf of Ontario Liberal Party only to record a third-place finish. In 1991, his name was inducted into the National Baseball Hall of Fame. He is the first Canadian to achieve the feat.

Married thrice in his life, he divorced his first wife Kathy Williams in 1987. They had tied the nuptial knot in 1965. The couple together had three children. He married Maryanne Miller on October 22, 1988. The marriage lasted until the death of Miller on January 12, 1991. They were blessed with a child. In 1993, he married for the third time. His third wife Lydia Farrington was alive until recently. However, she passed away on August 27, 2018. They did not have any children together.