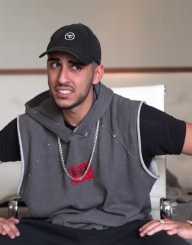 FaZe Rain is a social media celebrity from Canada. The gamer has been known to share many gaming tips on YouTube.

FaZe Rain was born on May 29, 1996, in Toronto, Canada. His name at birth was Nordan Shat. His parents were often arguing through his early years. Much of his childhood was dealing with the depression and sad emotions.

FaZe Rain had poor grades and attempted to take his life. His therapist advised Rain to find a hobby. Gaming was the one thing that made him happy. His father left the family. His mother has since remarried. He has one sister, one step-sister, and one step-brother.

FaZe Rain started to share his skills and tips from the video game Call of Duty on YouTube. He was quickly popular with the e-gamers who appreciated his talents.  Rain is a member of the FaZe Clan. It is a sniping clan that professionally plays Call of Duty.

Temper owns the clan. Fans of the FaZe Clan can follow the group on YouTube, purchase fan gear, and cheer them on in the Call of Duty competitions.

FaZe Rain also has a personal channel on YouTube called “Nordan Shat.” He uses this channel for more private chats about him rather than his gaming.

FaZe Rain has dated, but he is not involved in a long-term relationship.

FaZe Rain dealt with depression early in his life due to the unstable family life he had. He was suicidal at one point. He has since been working with a therapist. He shares this experience on his YouTube channels.

FaZe Rain does more than play video games. He opens up to his audience about dealing with negativity and depression. He was able to find some positive motivation from social media, namely YouTube. He works to share what he has learned about coping with others.

Has more than 4 million subscribers to the TrickShotting YouTube channel