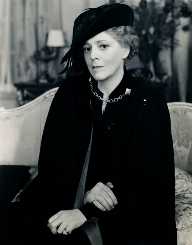 Ethel Barrymore was one the actresses of stage and screen at the beginning of the 1900s.  She is a member of a famous acting family

Ethel Barrymore was born on August 15, 1879, in Philadelphia, Pennsylvania.  Her name at birth was Ethel Mae Blythe.  Even though her father Maurice earned his degree in law at Cambridge, he chose to pursue acting when he immigrated to the United States.

Ethel Barrymore did not follow the path of acting right away.  Ethel Barrymore took up the piano with interest in becoming a concert pianist.  Her mother passed away from tuberculosis in 1893 at the age of 37.  Georgiana's children would be working much more in stage productions.

Ethel Barrymore received a Roman Catholic education in her hometown of Philadelphia.

Ethel Barrymore s first appearance on the stage was at London's Haymarket Theatre in 1884.  This was while her family was visiting relatives in England for two years.  After her mother passed, her grandmother got her working on the stage.

Her first Broadway performance in the United States was in 1895 that starred her uncle John Drew, Jr.  It was called The Imprudent Young Couple.  The next year they performed again in Rosemary. Ethel Barrymore toured London again with William Gillette's troupe in a show titled Secret Service.  She signed on with other groups and performed in other plays such as The Bells and Peter the Great.

After returning to the United States, she was quickly cast in other plays.  Her starring role as Madame Trentoni in Captain Jinks of the Horse Marines got the positive attention of critics.  It was also the only time that her father Maurice saw her perform, and he told her how impressed he was.

Ethel Barrymore started her career in film in 1914 in the film The Nightingale.  Between 1914 and 1919 she appeared in fifteen silent films.  She returned to the stage but later came back to Hollywood for many roles in some of her most acclaimed films.

Ethel Barrymore played the Czarina in Rasputin and the Empress, the mother in None But the Lonely Heart, and an ailing woman in Pinky.  The latter two roles earned her Academy Award and a nomination respectively.

Ethel Barrymore did take on some roles for television. Ethel Barrymore was also a guest in NBC's All-Star Revue.  She also published her memoirs in 1955.  Her last film was in 1957 in Johnny Trouble.

In 1898, Ethel Barrymore was touring with a theater group in London.  Ethel Barrymore met young Winston Churchill.  She turned down his proposal for marriage because she wanted nothing to do with being a politician's wife.  She did marry Russel Griswold Colt in 1909.

The couple had three children. Ethel Barrymore filed for divorce as early as 1911 because of the struggles in their relationship.  They did split in 1923, and Ethel Barrymore wanted all of the money to be spent on their children rather than alimony for herself. Her favorite sports were boxing and baseball.

Ethel Barrymore and her two brothers Lionel and John were all actors in their own right.  The three siblings only appeared in one film together.  It was the 1932 movie Rasputin and the Empress.

Another silent film titled National Red Cross Pageant from 1917 included all three but has been considered lost. Ten years after John died, Ethel and Lionel both appeared in Main Street to Broadway in 1953.  This would also be Lionel's last film of his carer.

Ethel Barrymore died on June 18, 1959, in Los Angeles, California at the age of 79.  The cause of death was cardiovascular disease.  She made many contributions to the arts of theater and film.

Her legacy can be seen in the Ethel Barrymore Theater opened in New York City by the Shuberts in 1928.  Her career is viewed for her attention to detail as a character actress.  Her great-niece Drew Barrymore is a Hollywood celebrity of the modern day film era.

Ethel Barrymore suffered from the cardiovascular disease for some years.  It was ultimately the cause of her death in 1959.

During the actor's strike in 1919, Ethel Barrymore was a supporter of the Actors' Equity Association.