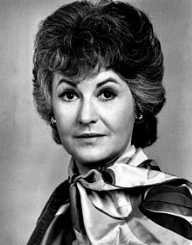 Estelle Scher was born 25th July 1923, to Charles and Sarah Scher. She was born in New York, United States. Estelle Getty was one of three children, with a sister and a brother. Her father worked in a glass business.

Estelle Getty had wanted to be an actress from an early age, and she began her career in the Yiddish theater. In 1982, she was cast as Mrs. Beckoff in the Broadway production of Torch Song Trilogy. From 1978 through to 2000, Getty acted in 13 movies, some of which were television films. Her movies included Tootsie (1982), Mannequin (1987) and Stuart Little (1999).

Estelle Getty made guest appearances in several television shows between 1981 and 1985, including Fantasy Island and Cagney & Lacey. Her big break came though when she was cast as Sophia Petrillo in The Golden Girls, an extremely popular television comedy series throughout the 1980s and into the early 1990s. She was in 180 episodes, with the series running from 1985 to 1992. When The Golden Girls finished in 1992, Getty, along with two of the other cast members, started a spin-off series called, The Golden Palace. The series only lasted one season.

Estelle Getty once again started doing guest appearances, and between 1987 and 2001, she appeared in approximately 17 shows, including 52 episodes of Empty Nest (1993-1995). During her years as a cast member of The Golden Girls, Estelle Getty co-wrote her autobiography, called, If I Knew Then, What I Know Now… So What? which was published in 1988.

Estelle Getty was nominated on seven occasions for an Emmy Award and won in 1988 as the Outstanding Supporting Actress in a Comedy Series – The Golden Girls.

She was also nominated for three Golden Globes Awards, and she won in 1985, for Actress in a Leading Role-Musical or Comedy Series – The Golden Girls.

Estelle Getty married Arthur Gettleman in 1947. They had two sons, Carl and Barry.