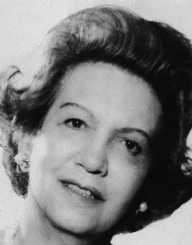 Josephine Esther Mentzer was born 1st July 1908, to Max Mentzer and Rose Rosenthal. She was born in Queens, New York City, in the United States. Lauder was one of nine children. Her mother had five children from her first marriage, and when she migrated to the U.S., she married Lauder’s father, and she had four more children with Mentzer. Lauder was the youngest child.

She was officially named Josephine, but her nickname was Estee, and this was the name she became known by.

Estée Lauder studied at Newtown High School in Queens. Along with the rest of her family, she worked in the hardware store owned by her father, which gave her an early introduction into the world of business.

Estée Lauder’s uncle, Dr. John Schotz, was a chemist. He had a business called New Way Laboratories, where he created beauty products including lotions, creams, and fragrances. Lauder watched her uncle mix and create his products with great interest. When she graduated from high school, Lauder went to work with her uncle.

Estée Lauder started by selling the products to her friends, but her beautiful skin was noticed when she was getting her hair done, so Lauder returned to the salon with the product to demonstrate and for the other clientele to try. The salon owner, Florence Morris, invited Lauder to sell the products at the new salon she was opening.

In 1953, Estée Lauder introduced a bath oil, which was a fragrance in disguise. This was the turning point for Lauder’s company. Selling 50,000 bottles in that first year, by 1984 it was selling 150 million bottles.

With the continued success of her bath oil, Youth Dew, Estée Lauder decided to expand internationally in the early 1960s. The company sold its product into Harrods, London, as the first overseas store to stock their product. They also opened an office in Hong Kong.

Several new fragrances were released during the same period, which entrenched the company’s popularity.

In the years that followed, Lauder introduced several new brands under the Estee Lauder umbrella. These included the men’s brand, Aramis, Clinique, Precriptives, and Origins.

The Estee Lauder company has continued to grow and expand throughout the years, and it has become a household name throughout the world, selling products in over 70 countries.

Estée Lauder resigned from her position of President in 1973, and her son Leonard took over. She remained Chairperson of the Board.

In 1985, a television documentary was aired about Lauder. It was called Estee Lauder: The Sweet Smell of Success.

She also released her book, Estee: A Success Story, in 1985.

Among her achievements are the following:

1978:   Awarded the Insignia of Chevalier of the Legion of Honor (France)

Estée Lauder married Joseph Lauter in January 1930. They changed the surname to Lauder soon after that. The couple have two sons, Leonard, and Ronald. Both sons went into the family business.

Estée Lauder has left a wonderful legacy to the world and her family.

The business is still run by the family, with many members involved in different aspects of the empire.

Estée Lauder is a role model for female businesswomen and entrepreneurs alike, showing what hard work and persistence can achieve.