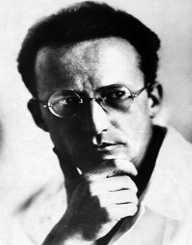 Erwin Schrödinger was an Austrian physicist who worked extensively in the development of some fundamental results in the field of quantum theory. Born on August 12, 1887, his works set the grounds for wave mechanics by formulating the wave equation and matrix mechanics. With his in-depth knowledge of wave mechanics, he originated the physical meaning of wave function. Erwin Schrödinger wrote several books in other fields of physics including electrodynamics, color theory, statistical mechanics and thermodynamics, general relativity, physics of dielectrics and cosmology. Erwin Schrödinger also tried his hands on formulating a unified field theory. Erwin Schrödinger also gave much time to the philosophical aspect of science, religion, ancient and oriental philosophical concepts and ethics.

Erwin Schrödinger was born on August 12, 1887, as the only child of Rudolf Schrödinger and Georgine Emilia Brenda Schrödinger in Vienna, Austria. His father was a cerecloth producer and botanist and his mother a Professor of Chemistry at Technische Hochschule, Vienna. Erwin Schrödinger studied under Franz S. Exner and Friedrich Hasenohrl in Vienna from 1906 to 1910. During this period, he worked with Karl Wilhelm Friedrich "Fritz" Kohlrausch in conducting various experiments. After the studies, Erwin Schrödinger worked with Exner as his assistant. Being influenced by the works of Arthur Schopenhauer, at his early age, Erwin Schrödinger took interest in color theory and philosophy and would pursue this for his lifetime.

During the First World War, Erwin Schrödinger was drafted into Army as an officer in the Austrian fortress artillery from 1914 to 1918. After the war, Erwin Schrödinger worked as an assistant to Max Wien in Jena in 1920 and would later begin his career as an academia. In September that same year, Erwin Schrödinger was appointed ao. Prof (ausserordentlicher Professor or associate professor), in Stuttgart. The following year, he gained an appointment as o. Prof. (ordentlicher Professor, i.e., full professor), in Breslau currently Wroclaw in Poland. He later moved to the University of Zurich in 1921. Erwin Schrödinger replaced Max Planck at the Friedrich Wilhelm University in 1927. During the rise of the Nazi and its anti-Semitism, he left Germany for England in 1934. There, he became a Fellow of Magdalene College at theUniversity of Oxford.

Erwin Schrödinger lived an unconventional life, and that affected his work at Oxford as it was not accepted he shared his quarters with two women, his wife, and mistress. This made his move to Princeton University in 1934, where he refused a permanent position offered by the university. Erwin Schrödinger later picked a position at the University of Graz in Austria in 1936 after an appointment at the University of Edinburgh failed due to delay in getting a visa. He was dismissed from the university on the grounds of political unreliability after he denounced is opposition to Nazism, a position he later regretted. After the incident, he was cautioned not to leave the country but fled with his wife to Italy in 1938. He later gained a position at the University of Oxford and Ghent University.

In 1938, Erwin Schrödinger received an invitation from the Taoiseach, Eamon de Valera in Ireland as a resident. While there, he contributed to the establishment of the Institute for Advanced Studies in Dublin. In 1940, Erwin Schrödinger was appointed the Director of the School for Theoretical Physics, where he would work for 17 years. He became a naturalized citizen of Ireland in 1948 but did not denounce his Austrian citizenship.

During his early scientific years, Erwin Schrödinger worked along with his former teacher, Franz Exner in the field of atmospheric electricity, electrical engineering and atmospheric radioactivity. During this time he also studied mathematics statistics, vibrational theory and the theory of Brownian movement. In 1912, Erwin Schrödinger presented a theoretical estimate of the probable height distribution of radioactive substances, meant to explain the observed radioactivity of the atmosphere. Erwin Schrödinger further worked on this theory and that of Victor Franz Hess in Zeehame to confirm the estimate in 1913. This experiment won him the Haitinger Prize of the Austrian Academy of Sciences in 1920. Erwin Schrödinger last physical experiment was on the coherent light in 1919 and turned his focus to theoretical works.

Erwin Schrödinger took an interest in studying the quantum theory as proposed in the works of Albert Einstein, Max Planck, Arnold Sommerfeld and Neil Bohr among other scientists during the first year into his career. Knowledge acquired from these studied was implemented in his studies of theoretical physics. It was not until 1920 that he made his first publication about atomic theory and the theory of spectra during his work with Sommerfeld ad Wolfgang Pauli in Germany.

Erwin Schrödinger completed his first article about the framework of the Bohr-Sommerfeld effect of the interaction of electrons on some features of the spectra of the alkali metals in January 1921. With the use of method developed by the mathematician Herman Weyl, Erwin Schrödinger worked on anatom from a geometric point of view in 1922. This work became an important step in prediction some of the features of wave mechanics as the research proved that quantum orbits are related to some geometric properties. That same ear, he formulated the Erwin Schrödinger equation of the relativistic Doppler effect for spectral lines, which was based on the hypothesis of light quanta and considerations of energy and momentum.

Erwin Schrödinger was awarded the Nobel Prize in Physics in 1933 for the formulation of the Schrödinger equation. He also received other awards including, the Max Planck Meal, Austrian Decoration for Science and Art and the Erwin Schrödinger Prize from the Austrian Academy of Sciences. He was an Elected Foreign Member of the Royal Society in 1949. The Schrödinger’s cat was named in his honor.