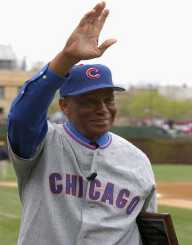 Ernie Banks Was a professional baseball player who played in the Major league Baseball (MLB). He was commonly known as "Mr. Sunshine" and "Mr. Cub" because of his positive attitude and sunny disposition. In his 19-year career, he represented his team in 14 All -Star Games and was titled National League Most Valuable Player (MVP) in 1958 and 1959.

He was born on January 31, 1931, in Dallas, Texas. His parents were Eddie and Essie Banks. He was second born among his twelve siblings. His father worked in a construction and a warehouse loader for grocery chains. Banks studied in Bookers T Washington High School and graduated in 1950. His school didn't have a baseball team and therefore he played softball in the church's team in summer.

He was a member of a semiprofessional baseball team called Amarillo Colts. In 1951, he was enrolled in the U.S Army where he worked in Germany during the Korean War. He was discharged in 1953 and joined the Kansas City Monarchs. That season he achieved an average of 347 batts.

Ernie Banks got enrolled with the Chicago Cubs in 1953 and made his first major league debut in September playing 10 games for Wrigley field. He was the Cubs first black player until 1954 when Cubs enrolled the second black player Gene Baker. They became good partners and went for road trips together. They were the first blacks in a major league to participate in a double play combination.

He continued to advance in his career and in 1955, he achieved 44 HR, 117 RBI, and 295 battings. He also set a new record of five grand slam homeruns in one season.  In the same year, he got nominated as the third league’s Most Valuable Player (MVP) behind Duke Snider and Roy Campanella. During this same year, the team won 29 of 77 road games. Unfortunately, in 1956, he got a hand infection which made him break his personal best run of 424 consecutive games. However, he still managed to finish that season with 28 HR, 85 RBIs and 297 batting on average.

In 1960, he led with a 41 home run and 117 RBI and received the first ever annual National League Gold Glove shortstop award. This prompted Joe Reichler from Associated Press to report that Milwaukee Braves were willing to trade their team members for Banks. This trade off would include their pitchers; Joey Jay, Don Nottebart and Carlton Willey, outfielder Billy Bruton, first baseman Frank Torre. Ernie Banks was appointed a player-coach in 1967 season.

Debut And Rise To Stardom

In 1977, he was voted into the National Baseball of Fame and received 321 votes out of 383 ballots. Ernie Banks faced fierce completion, from the Veteran committee and the Negro Leagues. Despite all odds, he got a special award from the Baseball Writers' Association of America.

Ernie Banks received the Lou Gehrig Memorial Award (1968) as an honor for his skills and personal character.  It was during this year that he managed 32 home runs, 83 RBI, and 246 batting average. In the year 1970, he achieved The Lincoln Academy of Illinois and also the State’s highest honor known as the "Order of Lincoln".

Due to his positive attitude, he was nicknamed "Mr. Cub" and "Mr. Sunshine" He is considered to have made many contributions to the American diverse culture, social heritage, and the scientific field. In 2009, he was given the designation of a Library of Congress Living Legend. Later in 2013, he was awarded the presidential Medal of Freedom. This occasion took place in the presence of Bill Clinton and the renowned show presenter Oprah Winfrey.

Ernie Banks established the Live Above & Beyond Foundation charitable platform, to assist the youth, boost their self-esteem and their health.

Banks tried politics in 1963 but lost the election and he decided to venture in other-other business ventures. Some of the ventures include: working for Seaway National Bank, buying a gas station, and working for an insurance company. By the age of 55 years, he had built assets estimated to have been $4million.

In collaboration with Bob Nelson, they became the first blacks to own a U.S. Ford Motor Company, in 1967. Two years later Banks was selected to be one of the directors of the Chicago Transit Authority in 1969.  On one occasion, he was presented with a medal by the Pope, while on a trip to Europe. In 1981, he divorced Eloyce and remarried Marjorie in 1984. Marjorie was not faithful and was part of a group that discussed race relations with MLB executives.

Ernie Banks was the first player to be retired out of the team by Cubs with his uniform number 14. Cubs did not retire anyone else until five years later.

He was listed 27th by the Society for American Baseball Research on the 100 list of greatest baseball players.

After he was discharged from military service in 1953, Banks married Mollye Ector. After two years of marriage, they filed for divorce and briefly reconciled. Their marriage ended when they made an agreement to settle for $65,000.  He later eloped with Eloyce Johnson. They were blessed with two twin sons and four years later they got a daughter.

In 1961, Ernie Banks had problems with his knee from an injury he had sustained while in the military. In 1962, he was hit by a fastball on his head by Moe Drabowsky a former Cubs pitcher and acquired a concussion. He was admitted two night in the hospital.

Even though he got setbacks from ill health he still managed to score highly. For example, in 1963, after a single game record achievement of 22 putouts as a first baseman, he suffered a setback. He contacted mumps but later finished that season with 18HR, 64 RBI and an average of 227 batting. Despite the various setbacks, Cubs has set a record win since the 1940s. Banks reached his 400th home run on September 2, 1965, after scoring 28 HR, 107 RBI and 265 batting average during the All –Star Game.

On January 23, 2015, Ernie died of a heart attack. He died at a Chicago hospital just eight days to his 84th birthday.

He is was the first in the Chicago Club to have his uniform 14 retired by the team. A status that only 6players have attained since his time.