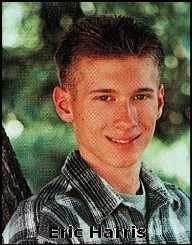 Columbine school shooter Eric Harris was born Eric David Harris on the 9 April 1981 in Wichita, Kansas to Wayne Nelson Harris and Katherine Ann Pool. He had a younger brother Kevin. His father was in the US Air Force where he worked as a transport pilot working out of bases in Ohio, Michigan, and New York. In 1993, Harris Snr. lost his job and retired from the military due to cutbacks. The family moved to Littleton, Colorado in July 1993.

Eric Harris was enrolled at Ken Caryl Middle School and then proceeded to Columbine High School.

Eric Harris met Dylan Klebold when he was a Ken Caryl Middle School, and the two boys became close friends. In 1995, when Harris was a pupil at Columbine High School, he met Brooks Brown, and they also became friends. In his first year at high school, Harris met Tiffany Typher. They went on a date, and when she refused another date, he pretended to kill himself by saturating himself with fake blood.

Harris and Klebold both had difficulty fitting into high school.  They began to display anti-social behaviour in their Sophomore year. After breaking into a vehicle, they were put on a juvenile diversion programme. The boys worked together at Blackjack Pizza, where police later proved that a gun used in the Columbine shooting were bought from a man called Mark Manes; who former Columbine student and co-worker Philip Duran had introduced the boys too.

A friend of Klebold's Robyn Anderson then purchased a rifle and two shotguns which she gave to Harris and Klebold. These weapons also were used in the Columbine High school massacre. The boys set about becoming familiar with the guns using pine trees and bowling pins for target practice. Harris continued his anti-social behaviour and disagreed with a friend, Brooks Brown. Brown had been giving him a lift to school each day, and they fell out over gas money and timekeeping.

When Brown told Eric Harris he was no longer willing to give him a ride to school; Harris targeted the Brown household with firecrackers and crank phone calls. Harris then began seeing a therapist to deal with his anger management problem. He was also placed on the drug Luvox, an anti-depressant. He was keen to get into the US Marines and shortly before the school massacre he had received notification that his application had failed.

On the morning of the 20 April 1999, Harris and Klebold planted a bomb Columbine School’s cafeteria. Their plan was for the bomb to go off mid-morning, then shoot people as they evacuated the building. When the bomb failed to go off, they entered the school and began shooting, killing 12 students and a teacher plus wounding 20 other people. Eric Harris then shot himself in the head and Klebold did the same a few moments afterwards.

FBI Supervisory Special Agent Dwayne Fuselier and Dr. Frank Ochberg were part of the FBI and its team of psychologists and psychiatrists who were involved in a summit held in Leesburg, Virginia to investigate the killings. Some of their conclusions were that what drove Harris and Klebold was that as radically different individuals they fuelled each other. They concluded that rather than being a troubled kid as portrayed in the media at the time, Eric Harris was a psychopath.