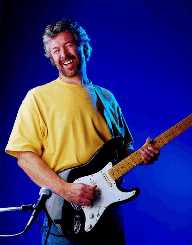 Eric Clapton is an American musician who is best known as one of the greatest guitarists of all time.

Eric Clapton was born in Surrey, England on 30 March 1945. Clapton was raised by his grandparents, Rose and Jack Clapp. Clapton’s mother Patricia was only sixteen when she became pregnant by Canadian soldier Edward Fryer. Clapton grew up thinking his mother was his sister and his grandparents were his parents. His mother would marry and move to Germany leaving him behind.

Eric Clapton became the guitarist for the British rock and roll band, The Yardbirds. The band were influenced by blues music and although not hugely successful are considered highly influential for launching the careers of Clapton and Jimmy Page. It was with The Yardbirds in 1964 that Clapton played in his favorite venue, Albert Hall, for the first time. Clapton left The Yardbirds in 1965 just as the band was making a breakthrough following the release of the single, For Your Love.

Eric Clapton then spent several years drifting around different bands never staying more than a few months with any one group. Despite this nomadic period Clapton developed a big reputation in Britain as one of the best guitarists in the business. In 1966, Clapton joined the band with which he would rise to stardom, Cream. Clapton formed Cream with drummer Ginger Baker whom he knew from the British music scene. Clapton also invited bass guitar player Jack Bruce to the band, Bruce had also played with Baker previously. The band name, Cream, refers to how the band would be a collaborative supergroup made up of the cream of British music.

The band began building a reputation on the London Blues circuit and also performed with Jimi Hendrix, who was a fan of Clapton. The band’s first album was titled Fresh Cream and released in 1966.The album reached number six in the UK charts and broke into the top 40 in America, where Clapton was practically unheard of at the time. The album was innovative as one of the pioneers of drum solos in rock music. The single I Feel Free reached number eleven in the UK, it was included on the USA release of Fresh Cream.

In 1967, the band toured America for the first time. This was followed by the release of a second album, Disraeli Gears. The record was a chart success and reached the top five in the charts of both Britain and America. The album featured the psychedelic hit, Sunshine of Your Love, which Clapton wrote with Jack Bruce and Pete Brown. Sunshine of Your Love reached number five in the USA charts. The band followed the success with a double album release the following year. Wheels of Fire, was released as a double album to allow for the band’s extended solos on tracks. It was the first double album to go platinum and went to number one in America.

Eric Clapton would provide the vocals on the track, Crossroads, which was restyling of an old Blues song. All the members of the band felt their project had run its course after Wheels of Fire. The live performances had devolved into self-indulgent solos and Baker and Bruce’s hostility to each other was wearing out the band. The band went on a farewell tour of America and a final album, Goodbye, was released in 1969. A number of notable acts opened for Cream on their farewell tour, Deep Purple, Yes and Rory Gallagher’s Taste.

Following the end of Cream, Eric Clapton and Baker formed a new group, Blind Faith, with Steve Winwood and Ric Grech. Blind Faith is recognized as the first real rock and roll ‘supergroup,’ as it combined members of Cream, Family, and Traffic. Blind Faith attracted huge attendances at concerts and their self-titled album topped the pop charts on both sides of the Atlantic. However, Clapton was deeply unhappy with the group, which he felt had just become a Cream tribute act.

Eric Clapton left the group and worked on some short-lived projects including performing with John Lennon and George Harrison. He also began to work as a solo artist. His first solo album, Eric Clapton, enjoyed some moderate success. Clapton wants to underplay his star status, so he formed Derek and the Dominoes with him acting as a guitarist. The group’s best known track, Layla, was released in 1971. Clapton descended into drug and alcohol addiction. He began to work on solo material again and his cover of I Shot the Sherriff reached number one in the USA. 1977 saw the release of Slowhand, Slowhand being a nickname Clapton had held since his earliest performances. The album featured some of Clapton’s best known songs, Cocaine, Lay Down Sally and You Look Wonderful Tonight. The album reached number two on the Billboard charts.

Eric Clapton also continued to collaborate, working with Roger Walters and Phil Collins. In 1991, Clapton released Tears in Heaven for the soundtrack of the film Rush. The song sold nearly three million copies in the USA and reached number one in a number of countries. Clapton had down a number of charity concerts and performances throughout his career, but the Comic Relief single, Love Can Build A Bridge, was his first UK number one single, released in 1995. Clapton continued to perform and release material; his most recent album was a live recording of a concert in San Diego in 2016.

Eric Clapton met Patty Boyd while she was married to his close friend George Harrison. Clapton developed an infatuation with Boyd and wrote Layla and You Look Wonderful Tonight about her. They married in 1979. The marriage ended in 1988, mainly due to Clapton’s addiction to alcohol. Clapton fathered a daughter, Ruth, with Yvonne Kelly while still married to Boyd, but he did not acknowledge her as his daughter until 1991.

Clapton had a son Connor with Lory Del Santo. Connor died in 1990 when he fell out the window of an apartment belonging to a friend of Del Santo. The song Tears in Heaven is mostly believed to be about Clapton’s son. Clapton has three more children, Julie Rose, Ella Mae and Sophie, all with Melia McEnery, whom he married in 2002. Clapton battled heroin and alcohol addiction during his life. He checked into rehab in 1988.

Eric Clapton won his first Grammy Award in 1972 for the album of the year. It would be nearly twenty years before he added his second award for Best Male Rock Vocals. In 1992, Clapton won five Grammy Awards for the song Tears in Heaven and his Unplugged album.

He won Best Blues Album in 1994 for From the Cradle, and in 1996 he won a further two Grammy Awards for Change the World. 2006, saw Clapton given a lifetime achievement award at the Grammy Awards. Clapton has been inducted into the Rock and Roll Hall of Fame three times, The Yardbirds, Cream and as a solo artist.