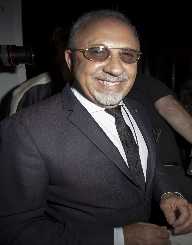 Emilio Estefan moved from Cuba to Miami, Florida when he was in his teens and earned money doing gigs playing the accordion.  He did various other jobs including working for Bacardi Imports. Around the time he formed a band, the Miami Latin Boys, playing Cuban influenced dance music. After hearing fellow-Cuban Miami resident Gloria Fajardo singing, he asked her to join the band. They then changed the band’s name to the Miami Sound Machine.

The band had a major hit with the album Primitive Love (1985). Their subsequent album Let It Loose (1987) was also a hit. Both albums produced a number of hit songs. The success of these albums led to both national and international success for the Miami Sound Machine.

Apart from producing the Miami Sound Machine, Emilio Estefan is involved his wife Gloria Estefan's career and has also produced other artists including Jennifer Lopez, Shakira, Marc Anthony and Ricky Martin, all of whom have had spectacular success.

As an author, Emilio Estefan has been involved in the production of three books. Estefan Kitchen is a recipe book based on the recipes of their Bongos Cuban Cafe which producers food based on Cuban cuisine. He had a bestseller in 2010 with The Rhythm of My Success, telling the story of how he pursued the American Dream from Cuban refugee to successful music producer, company owner, songwriter and author. In 2011, he collaborated with The Miami Herald to produce The Exile Experience: A Journey to Freedom. This book documents the personal stories of Cuban refugees and the individual success they found in the U.S.

Over the course of his career, Emilio Estefan has won over 19 Grammy Awards. In the late 1990s, he was on the Hispanic Business magazine’s list of the 100 Most Influential Hispanics in the U.S. Along with his wife Gloria Estefan, he was presented with the Presidential Medal of Freedom in 2015.

He has been married to Gloria Estefan since 1978 and the couple has two children, a boy, and a girl. Musician singer-songwriter Emily Estefan is his niece.