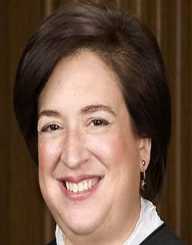 US Associate Supreme Court Justice Elena Kagan was born in New York City on the 28 April 1960 to Robert Kagan, an attorney and Gloria Gittleman, a teacher. The couple had three children, a daughter, and two sons.

Between 1986 and 1987, Elena Kagan was a law clerk for Judge Abner of the US Court of Appeals on the DC Circuit. In 1988, she became a clerk for Supreme Court Justice Thurgood Marshall. She was an associate with the legal firm Williams & Connolly in Washington DC (1989-1991) and from 1991-1995 was a professor at the University of Chicago Law School. During this period, in 1993, Senator Joe Biden made Kagan special counsel on the Senate Judiciary Committee.

Elena Kagan was associate counsel to President Bill Clinton (1995-1996), before being appointed Deputy assistant to the president on domestic policy as well as serving as deputy director of the Domestic Policy Council (1997-1999). In 1999, the president nominated Kagan to the US Court of Appeals, but the nomination lapsed. From 1999 until 2003, Kagan was a professor at Harvard Law School; and from 2003 until 2009, she was the Dean of Harvard University Law School.

In 2010, Elena Kagan became the fourth woman to be appointed to the bench of the US Supreme Court. She was also the first woman to be designated as the solicitor general of the United States.