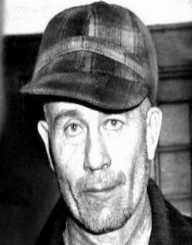 Edward Theodore Gein popularly known as The Butcher of Plainfield was an American serial killer and body snatcher. Born on August 27, 1906, he admitted to the murder of two women, hardware store owner, Bernice Worden in 1957 and tavern owner Mary Hogan in 1954 all in Plainfield. Gein's horrific murder and body snatching activities gained worldwide notoriety and became the basis for several horror films and movies. Gein was deemed unfit to undergo trials after his arrest due to his mental state. He was confined to a psychiatric institution until his death.

Edward Theodore Gein was born on August 27, 1906, in La Crosse County in Wisconsin. He was the second child of Augusta Wilhelmine and George Philip Gein. His elder brother was Henry George Gein. Gein's childhood was a difficult one, having to endure an alcoholic father and a verbally abusive mother.

Unable to keep up, Gein’s father moved the family to a 155-acre farm in Plainfield, Waushara County, Wisconsin where they lived in isolation. Augusta was very religious and allotted enough time to her children to teach them the Bible and the immorality of the world. She preferred her children living in isolation and punished Gein whenever he tried making friends.

At age 66, Ed Gein's father died of a heart attack caused by his excessive alcohol intake.Gein and his brother Henry since began taking odd jobs to sustain the family. He worked as a handyman and babysat for neighbours. Henry became very concerned about his brother's strange attachment to their mother and usually spoke ill about her in the presence of Gein. Henry died mysteriously in a fire on April 1, 1940.

The two brothers were burning march vegetation, but the fire got out of control of the fire department to extinguish it. After the incident, Gein reported of Henry’s disappearance and a search party went on a search only to find him burnt face down. Though there were bruises on his head, the police ruled out any foul play and listed asphyxiation as the cause of death.

Nonetheless, some people suspected Ed Gein killed his brother. On December 29, 1945, his mother also died of a stroke and that devastated Gein and in his words, made him a loner in the world.

After the death of his mother, Ed Gein became increasingly interested in death-cult magazines and adventures. He read about the atrocities of the Nazis and stories about cannibals. Gein was arrested for the sudden disappearance of the hardware store owner, Bernice Worden on November 16, 1957. He became the main suspect because he was the last person to deal with Worden before her disappearance. Law enforcement agent went on a search and found Worden’s remains on Gein’s farm. She had been fatally shot, decapitated, and was hanging upside down, with ropes on the wrist.

Upon a further search on Ed Gein's compound, the authorities found the head of Mary Hogan, a tavern operator who disappeared in 1954. The search party also found a corpse and human body parts some of which he had used to make household items, masks, and clothing. He had used human skin in covering some chairs, skin from female heads for masks, wastebasket made of human skin and the vulvas of two females judged about fifteen years old among several others.

Gein had body-snatched these human remains between 1947 and 1952 during nocturnal visits to local cemeteries. He admitted to killing the women because they resemble his mother and exhumed bodies that he considered resemble his mother.

Ed Gein was arraigned before the Waushara County Court on November 21, 1957. He was charged on one count of first-degree murder but pleaded not guilty on the grounds of insanity. He underwent medical checks and was diagnosed with schizophrenia, making him unfit for trial. He was since confined to the maximum-security facility, Central State Hospital for the Criminally Insane (now the Dodge Correctional Institution) in Waupun, Wisconsin.

He was later moved to the Mendota State Hospital in Madison, Wisconsin. In 1968, doctors determined he could stand for his defence and was put on trial. After the trial that lasted for a week, Gein was found guilty for the murder of Worden and was confined at the Central State Hospital for the Criminally Insane where he spent the rest of his life. He died of respiratory failure on July 26, 1984, at the age of 77.

Ed Gein's life story has inspired several movies and books. He is the subject for the horror films Psycho, 1960 based on Robert Bloch’s 1959 book. Others are the Texas Chain Saw Massacre (1974); and The Silence of the Lambs.