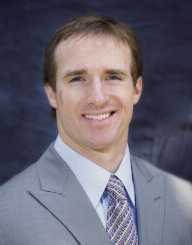 Drew Brees plays American football as a quarterback for his team New Orleans Saints. He became famous in 2009 when he led his team to win the super bowl XLIV whereby he earned on top the most valuable player honors. While still on that side, he has broken many single-season NFL records that had been held for long. Before joining the Saints, he had a five-year NFL career under the San Diego Chargers. After that, he signed for the Saints in 2006.

Andrew Christopher Brees was born on 15th January 1979 in Austin, Texas. His entire family was regarded a football powerhouse because from his maternal grandfather Akins Ray, to his uncle Marty Akins, they both excelled well in that sport. In Texas high school, his grandfather was the all-time coach in the history of the game while the uncle was a great quarterback in the year 1975.

While studying at Westlake High in Austin, Drew participated in both baseball and basketball but truly excelled in football. In his senior year at Westlake in 1996, he led his football team to a perfect start of the season and went all the way to the state championship. He played more football after enrolling at Purdue University. It was here that he continued shining as a quarterback. In the four years, while studying and playing, Drew Brees reached the Heisman final twice, won the Big Ten Championship and went on a trip to the Rose Bowl.

Even after a stellar performance at high school and the college level, his height of 6 feet and his arm length made it hard for him to sign for a team that was participating in the 2001 NFL competition in the first round. That is why he signed for the San Diego Chargers in the second round of team selection. The inability to get into the first round was because his arms were perceived to have a joint strength that would be ineffective to the team during the game.

While at Chargers, Drew Brees rose up and proved himself to be the best quarterback that earned him a place as a full-time player starting all games in their 2002 season. For once, he led the young team to the playoffs stage in 2004.

After the 2005 season, Drew Brees left the San Diego Chargers as a free agent and joined the New Orleans Saints at a deal of about $60 million that would last for six years. Although his new team had been through many ups and downs, this did not affect his decision keeping in mind that he was a regular player at his former club. His new team had been significantly affected by the Hurricane Katrina, and he was lauded for his decision.

He never disappointed the new fans as he has been working hard to see the team succeed and rise in ranks since 2006. He went ahead to set an NFL record of 5,476 passing yards in the year 2011 even though it was broken later. In the same year, he made 46 touchdowns that earned him top the league that season. His pass attempts have an enormously high percentage in each game.

In 2009, Drew Brees led his team to win the Super Bowl XLIV in addition to earning himself the most valuable player award for that season.

Drew Brees is married to his college sweetheart Brittany Dudchenko. The event was done in February 2003. Their three sons are Baylen, Bowen, and Callen. Their only daughter is called Rylen. On arriving at New Orleans, they started the Brees Dream Foundation that is helping the children in need and leads the fight towards cancer.