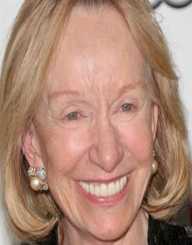 Doris Kearns Goodwin was born on January 4th, in 1943. She is a well-known American historian and a biographer. Over the years, Goodwin has earned a name for herself after writing biographies for some U.S. presidents such as Lyndon Johnson and the American Dream, Team of Rivals: The Political Genius of Abraham Lincoln, and The Fitzgeralds and the Kennedys. In 1995, she bagged home the Pulitzer Prize after releasing the book titled No Ordinary Time: Franklin and Eleanor Roosevelt.

Doris Kearns Goodwin was born on January 4th, in 1943. Her place of birth was in Brooklyn, New York. Her mother was called Helen Witt. On the other hand, her father was named Michael Francis Aloysius. Goodwin has a sister called Jene Kearns.

In the late 1960s, Goodwin went and worked for the government under the department of labor. During this time, Lyndon B. Johnson was the president of the United States. Afterward, she went and lectured Harvard University for about ten years.

In 1977, Doris Kearns Goodwin released her first book called Lyndon Johnson and the American Dream. This work earned her fame as it immediately became a bestseller. It was a huge leap to Goodwin as it kicked off her literary career on a high note.

Following the release of No Ordinary Time: Franklin and Eleanor Roosevelt, Doris Kearns Goodwin bagged home the Pulitzer Prize for History. This was in 1995. Three years later, she was honored with a degree in Doctor of Human Letters from Bates College. She was also bestowed with another honorary degree from Westfield State College.

In 2005, she was bestowed with a Lincoln Prize following the release of her book called Team of Rivals: The Political Genius of Abraham Lincoln- 2005.

In spite of her successful career, Doris Kearns Goodwin faced a plagiarism controversy after releasing The Fitzgeralds and the Kennedys. The magazine The Weekly Standard came up with the allegations that Goodwin had used several phrases from other books and that she had not attributed them. Due to the allegations that followed her, she had to step down from the Pulitzer Prize Board.

Doris Kearns Goodwin tied the knot with Richard Goodwin in 1975. Richard had worked under the administration of U.S. presidents Johnson and Kennedy. The two lovers had two sons together. Doris Goodwin also raised Richard’s son from his former marriage.