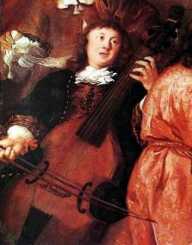 Dieterich Buxtehude was born on June 24, 1637. The place of Buxtehude’s birth is disputed, as records were not as well kept during that time as they are now. Historians guess that he was either born in what is now Sweden or Germany.

Dieterich Buxtehude had his first professional organist debut when he was 20 years old. He performed at Helsingborg. There, he showed off his skills. He was so well liked that he later played in Helsingor. Soon after his performance at Helsingor, he was hired as an organist in the town, working for St. Mary’s church. In the early part of his career, Buxtehude often traveled, performing at St. Mary’s and St. Olai’s, where his father still performed often.

When Buxtehude performed, he often played church hymns and other well-known songs of the time. However, he also composed his own music. Dieterich Buxtehude was music well-liked by other famous composers of the time, including Bach and Handel. These musicians, and others like them, would often visit Buxtehude to give him advice on his music, or to get advice in return.

As Buxtehude’s fame grew, he began to give more concerts than before. He also began to write music for instruments other than the organ, like the harpsichord. Dieterich Buxtehude wrote music not only for his own pleasure but the pleasure of others. He was known to write songs for funerals and marriages alike, as well as for other events. He composed everything from church chorals to chamber music, to other secular instrumental songs. Some of his most famous pieces are listed below.

The Lord is with me, that is why I am not afraid

One thing I ask of the Lord

Keep us, Lord, by your word

With Fried and Freud

Canzonetta in A minor for keyboard

Aria (in many variations)

When Dieterich Buxtehude wasn’t writing music, he was working as an active member of his church and community. He worked as the treasurer for his church for some years, as well as helping out with some of the other management of the building. Like before he reached his fame, Buxtehude continued to play his music at the church as well. No matter how famous he was, he always had time for his church.

Dieterich Buxtehude died from natural causes on May 9, 1707, in Helsingor (in what is now Denmark). He was 69 years old when he passed away.