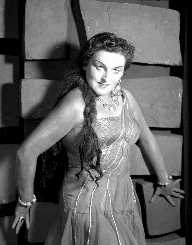 Swedish opera singer Birgit Nilsson was born in Vastra Karup, Sweden. Nilsson came from a family of farmers, and she was one of three children. Her father was the fifth generation of his family to farm their land. Nilsson showed an early interest in music. She sang in her church choir and later began singing lessons with Ragnar Blennow.

After auditioning at the Royal Academy of Music, Birgit Nilsson was awarded the Christina Nilsson scholarship. Her singing instructors were Joseph Hislop and Arne Sunnegardh. One of her teachers told her that farmer’s daughters do not sing opera.

Birgit Nilsson graduated from the Stockholm Academy of Music in 1946. Her opera debut was singing Agatha in Der Freischütz. Then in 1947, she sang the role of Lady Macbeth in Macbeth (Verdi). She appeared at the Glyndebourne Festival in 1951, singing Elettra in Idomeneo (Mozart).

Then in 1952, in Florence, Italy, Birgit sang Donna Anna in Don Giovanni. In 1953, she sang the role that she was to make her own for the first time: Isolde. Her performance heralded the arrival of one of the essential Wagnerian sopranos of the century.

Once established, Birgit Nilsson was offered many roles. She sang Wagner, Puccini, Straus, and Tchaikovsky and built up an impressive repertoire. After initial hesitation, Fritz Busch took an interest in the young soprano and 1951, assisted her in her first appearance outside Sweden. This was the role of Elettra in Idomeneo (Mozart) at the Glyndebourne Festival.

In 1953, Birgit appeared at the Vienna State Opera to widespread acclaim. She appeared in some festivals including the Bayreuth Festival in 1953, at the Bavarian State Opera, at the Munich Festival in 1954. A groundbreaking event was when she sang the role of Isolde at the Metropolitan Opera in New York City. Later in life, she cited her 1958 appearance as Turandot in La Scala in Milan as the most intense performance of her career, and one of the most critical moments of her life.

Birgit Nilsson was by now an international operatic sensation and sang at all the dominant opera houses including the Royal Opera House at Covent Garden, London and the Metropolitan Opera House in New York. In 1972, she made her first visit to Australia and sang at the concert that opened the Sydney Opera House.

The Nilsson Repertory is a term which refers to roles Birgit Nilsson made her own. She is considered one of the most beautiful Wagnerian sopranos of all time.

In 1999, Birgit Nilsson was made an honorary member of the Vienna Philharmonic Orchestra. Nilsson’s portrait features on the 500 kronor Swedish banknote.

Birgit Nilsson met her future husband, Bertil Niklasson on a train. They married in 1948 and stayed together until her death in December 2005. Niklasson died in 2007. The couple was childless.

Financially, Nilsson was shrewd. During her long career, she had been adept at negotiating her fees, and she subsequently became one of the highest paid opera singers of her day.

After retiring Nilsson in 1884, she lived in Bjärlöv, Sweden. She had earlier written an autobiography that was published in Swedish in 1977. An English translation was done and published in 2007. The title is La Nilsson: My Life in Opera.

Birgit Nilsson sprained her ankle when performing at the Met in 1971. She also had an accident when rehearsing Gotterdammerung and dislocated her shoulder. In later years, Nilsson suffered from a heart ailment.

In 1996, more than a decade after her retirement, Birgit Nilsson made a final appearance on the stage of the Metropolitan Opera House in New York. The event was a celebration of music director James Levine’s career at the Met. She delighted the audience by delivering the battle cry from Die Walkure. At age 77, her celebrated voice remained as powerful as ever.

Birgit Nilsson will go down in operatic history as one of the most potent Wagnerian sopranos of all time. She left many recordings behind but did not feel that records did her voice justice. Fully aware of the power of her voice, she did not enjoy listening to recordings of her singing.

The Birgit Nilsson Foundation awards a prize every two to three years to an opera-related event or individual. The inaugural winner in 2009 was the tenor Plácido Domingo. It’s a cash prize of $1,000.000.

An unsettling event in Birgit Nilsson’s life was an obsessive stalker who bothered her for over ten years. The person in question was Nell Theobald. Later, the young woman Theobald committed suicide.