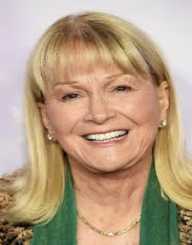 Actress Diane Ladd is an American Golden Globe-winning actor of the film and television. Over the years Ladd made an appearance in over 200 films. In addition to acting, she is also a film producer and an author.

Diane Ladd was born on 29th November 1935 in Meridian Mississippi to née Anderson and Preston Paul Ladner. Despite being the only child in the family, she grew up around several of her cousins.

Her dream was to be a District Attorney but changed her ambitions after the experience she claimed to have spoken to God about becoming an actress.

Ladd's mother was a staunch Catholic hence bringing her up in the same denomination. In church, she was an active choir member.

Diane Ladd later attended Mississippi High School. During her high school days, she participated in choir and played some parts in several plays.

Diane Ladd completed high school at the age of 16. Louisiana State University offered her a scholarship which Ladd choose to turn it down. After high school, she enrolled at New Orleans University where she did acting. She later admitted that it was so challenging for her.

During one of her performances in Gallery Circle Theater, John Carradine was impressed by Diane Ladd's talent. As a result, he gave her a chance at San Francisco production.

Her new role in Gallery Circle Theater prompted her to move to New York City. She landed at a gig as a chorus girl at Copacabana nightclub before making her debut at Broadway.

One of her cousins Tennessee Williams gave her a chance in the Broadway in 1968. Her first significant role came in play Carry Me Back to Morningside Heights.

Diane Ladd's biggest breath through came in 1974 when she starred film Alice Doesn't Live Here Anymore. The role earned Ladd a nomination in the Academy Awards as the best supporting actor.

Diane Ladd went on to establish herself in the Broadway stage. She made an appearance in several television shows and acting. Some of her most successful works include Dr. Quinn, Medicine Woman in 1993. One year later she was involved in Grace Under Fire.

In 1997, she starred Touched by an Angel. In all the three acts, she earned a nomination for Emmy Awards in all her three plays.

Her supporting role in Wild at Heart films in 1990 won her Academy Awards nomination for her role in the best supporting role best actress. Some of her other notable works include Primary Colors and 28 Days in 1998 and 2000 respectively.

Apart from her acting career, Diane Ladd is also a medical counselor and proponent in an alternative counselor. For 30 years she did her little-known job.

She went public for the first the first time about her work in 2007. Later, she authored a book, A Mental, Physical, and Spiritual Discovery her community initiative. Despite her age, she continues to appear in several films. Also, she offers consultations on alternative medicines.

At the age of 18, Diane Ladd married Bruce Dern. She gave birth to her first daughter in the same year of her marriage. The child, however, died of a swimming accident 18 months later.

The couple had their second daughter, Laura Dern, in 1967 who went on to become an actor. In 1969, the couple parted ways. She married William Shea Jr. in 1973. Their marriage however only lasted four years before the two divorced.

Her third marriage is with Robert Charles Hunter. The two married in 1998. The couple has a production company together.