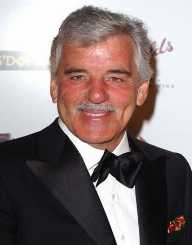 Dennis Farina was an actor known mainly for his roles as a detective, police officer or a mobster. In a long television career, Farina's most famous character was that of Detective Joe Fontana on Law & Order, a police procedural and legal drama.

Dennis Farina was born on February 29, 1944, in Chicago, Illinois. His father Joseph Farina was a doctor and his mother Yolanda, a housewife. Before taking on acting as a profession, Farina was employed as a police officer in the Chicago Police Department's burglary division. He spent 18 years there. As a police officer, he earned the reputation of 'The Great Wounder.' He became infamous for his habit of shooting the culprit in the butt or the thumb.

Before working as a police officer, he spent three years in the US Army.

Dennis Farina did not enter the show business before he was into his late thirties. While still working for the Chicago Police Department, he was contacted to serve as a Police Consultant by Michael Mann. Subsequently, his first movie role came in the 1981 movie Thief. While the part itself was small, Farina was bitten by the acting bug, and he liked it. He then landed small roles in Miami Vice, Crime Story, and a few other Chicago-based films.

Dennis Farina played the role of Ray “Bones” Barboni, a criminal in the film Get Shorty. Early in his career, Farina was typecast into playing cop-based roles like in Reindeer Games, Big Trouble, Men of Respect and Out of Sight. He also played the lead role as private detective Buddy Faro in a CBS series of the same name. While doing short but pivotal characters such as the Battalion Commander in the Tom Hanks movie, Saving Private Ryan, Farina was hired to play Detective Joe Fontana on Law & Order in 2004.

He made ample use of his thick mustache and rough face while playing this character. This was his most famous role throughout his career.

Dennis Farina lent his voice to Wild Cat in the Justice League animated series. His recent roles involved comedy films like ‘The Grand’ with Woody Harrelson and ‘What Happens in Vegas’ where he played Cameron Diaz’s boss. In 2012, he was a regular in the HBO gambling miniseries Luck and made guest appearances in ‘New Girl’ in 2013.

In 1996, Dennis Farina won the Funniest Supporting Actor Award for his role in ‘Get Shorty’ at the American Comedy Awards.

In 2011, he received the Commitment to Chicago Award, at the Chicago Film Critics Association Awards.

Dennis Farina's notable nominations include ‘Outstanding Performance by a Cast’ at the 1996 Screen Actor Guild Awards. He was also nominated for the ‘Best Guest Actor in a Comedy Series’ at the 2013 OFTA awards for his role in New Girl where he played Nick’s father.

On the other side of the Law

A cop both on and off-screen, Dennis Farina faced jail when he was caught carrying a .22 caliber loaded pistol at the Los Angeles Airport. He claimed to have forgotten about the weapon but was sentenced to two years’ probation.

Dennis Farina was diagnosed with lung cancer and had a blood clot in his lung. He lost the battle for life after several months, at the age of 69. He died on July 22, 2013. He was buried at the Mount Caramel Cemetery in Illinois. His longtime partner Marianne Cahill survived Farina. He left behind three sons and six grandchildren.

Dennis Farina was part Italian and part American. He married Patricia A. Farina in 1970. The couple had three sons: Dennis, Michael, and Joseph. They divorced in 1980. In his later years, he lived with his longtime girlfriend, Marianne Cahill. Farina’s youngest son, Joseph is also an actor.