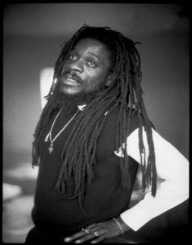 Dennis Brown was a Jamaican singer, often called the “Crown Prince of Reggae.”

Dennis Emmanuel Brown was born in the city of Kingston, Jamaica, on February 1, 1957. His father was a writer, journalist, and actor. His mother died when he was a child. He had three brothers and one sister.

Dennis Brown first performed in public when he was nine years old. He sang at a concert held for the end of the school year. At the age of eleven, he made an appearance at a local club. He sang with a group called the Fabulous Falcons. The members of the group liked him and asked him to join as their vocalist. He impressed the audiences with his talent. During one performance, he was showered with money. The musician Byron Lee spotted him and booked him to perform a few shows with American musicians.

Brown’s first recorded song was called “Lips of Wine.” It was never released. He then released a song called “No Man is an Island.” It was somewhat popular in Jamaica for a year. After that, it became a huge success. He started working with many different producers, such as Derrick Harriott, Coxsone Dodd, Lloyd Daley, Phil Pratt, and others. He recorded many songs. He also served as a backing vocal for musicians like Alton Ellis. He learned how to play the guitar, and he improved his songwriting. In 1970, he released his first album, No Man is an Island.

In 1972, Dennis Brown collaborated with the producer Joe Gibbs. One of his songs, “Money in my Pocket,” became very popular with reggae lovers in the United Kingdom. That same year, he performed on a Christmas show in Toronto, Canada. He released many more hits in Jamaica, such as “Westbound Train” and “Cassandra.” He was voted the best male vocalist by a Jamaican magazine. Two more of his songs, “Love Jah” and “Africa,” became very popular in London.

In 1974, Brown toured the United Kingdom with a few other Jamaican artists. He decided to stay there for a while and to focus on the British market. He performed at nightclubs in London several times per week. The first single he released there was “No More Will I Roam.” He also started his record label, called DEB.

In 1977, Dennis Brown released the album Visions of Dennis Brown. It was the most significant success of his career. The next year, he permanently relocated to the United Kingdom. His song “Cool Runnings” was his first hit on the Top 40 list of the British charts. In 1979, he closed down his record label. Apart from reggae, he started to perform in soul clubs and rock clubs. Some of his music also shifted to the dancehall style.

In the 1980s, Brown signed a deal with the American label A&M Records. He also started another label himself, called Yvonne’s Special. He released many albums and singles in Jamaica, the United Kingdom, and the United States.

Dennis Brown was a very prolific singer. In total, more than a hundred of his albums have been released, including live and posthumous albums. Two of them, Light My Fire and Let Me Be the One, were nominated for a Grammy award.

Dennis Brown was married to a woman named Yvonne. They had five children together. Apart from them, he fathered eight more children with other women.

Brown used marijuana from a young age. Over the years, he switched to cocaine and developed an addiction. His health became bad. He had respiratory issues. He died of a collapsed lung on July 1, 1999, at the age of 42.

On the first anniversary of Dennis Brown's death, a memorial concert was held in Brooklyn, New York. The next year, a charitable trust was opened in his name. It helps young people with their education and gives them musical instruments. In 2011, the Governor-General of Jamaica gave him an Order of Distinction in the rank of Commander.

Brown served as an inspiration for many Jamaican artists. Even Bob Marley himself considered him to be his rightful heir.