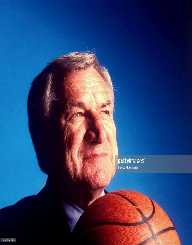 Dean Smith was a Hall of Fame member for his years as a college basketball coach. Basketball was a part of his life from childhood well into adulthood.

Dean Smith was born on February 28, 1931, in Emporia, Kansas. His father Alfred was the basketball coach at the high school in Emporia. His 1934 team won the state championship under his leadership. In his youth, Smith was very active.

Dean Smith attended Topeka High School. He played basketball for all four years and was named all-state his senior year. Smith was also the quarterback for the football team and the catcher of the baseball team.

Dean Smith attended the University of Kansas where he majored in mathematics. He continued played baseball and freshman football as well as basketball. Smith graduated in 1953.

While attending the University of Kansas, Dean Smith and his team won the national championship in 1952. In 1953, they were NCAA tournament finalists. He stayed on after graduation as an assistant coach in Kansas from 1953 to 1954. Even while he served in the United States Air Force in Germany, he coached the Air Force Academy's baseball and golf teams. Upon his return, he was asked to be the assistant coach under the University of North Carolina's coach Frank McGuire. He held that position from 1958 until 1961.

The change was that McGuire was forced to resign for violation of player recruitment protocol. The Chancellor of the school hired Smith as the head coach immediately.

In 1961, Dean Smith had his only losing season. He would lead his team to win seasons and make it a consistent success. In the late 1960s, the team won three back-to-back regular seasons and ACC tournament championships.

Smith's success was not just in men's college basketball. He was one of the coaches for the Summer Olympics team in 1976. That team won the gold medal in their event.

Dean Smith retired in 1997. It was an abrupt retirement statement. Still, he was asked for his professional opinion about the future of the University of North Carolina men's basketball program.

Dean Smith married Ann Cleavinger in 1954, and they had three children. They divorced in 1973. He then married Linnea Weblemoe in 1976. The couple had two children. Smith died on February 7, 2015.

In the course of his 36-year career with the University of North Carolina men's basketball team, he had 879 career victories and recognized as the most successful men's collegiate basketball coach.

Dean Smith was hired as the head coach of the University of North Carolina after his predecessor was removed for point-shaving scandals. He had to work with a shorter season and everyone's eyes on him. He was assigned to run a clean program that would reflect positively on the reputation of the university.

Dean Smith was against the death penalty. He was known to organize basketball practices in North Carolina prisons.

Dean Smith was diagnosed with Alzheimer's disease in 2010.

Author, Basketball:  Multiple Offense and Defense, A Coach's Life, The Carolina Way: Leadership Lessons from a Life of Coaching