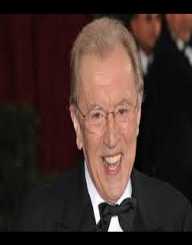 David Frost was a pupil at Gillingham and Wellingborough grammar schools. He went on to obtain a degree in English Literature from Cambridge University.

While at university, Frost began working on comedy sketches with Peter Cook. By the time he graduated, he had a traineeship with Associated-Rediffusion, a London television company. He found a gig at the Blue Angel club, and it was around this time that television producer Ned Sherrin invited him to host That Was The Week That Was, a satirical news show (1962-1963)

After the success of That Was The Week That Was, Frost went on to co-host Not So Much A Programme, More A Way of Life (1964). His next venture, The Frost Report provided a stage various comedians appeared including The Two Ronnies, The Goodies and the stars of Monty Python. Frost then moved into television interviewing with The Frost Programme. During this time he interviewed many of the political figures of the day. In the late 1960s, he also had a talk show in the United States. One of his most famous interviews was with Richard Nixon in 1977.

David Frost was married to Lynne Frederick between 1980 and 1982. He subsequently married Carina Fitzalan-Howard. The couple had three sons together.