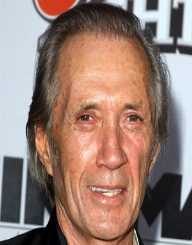 American actor David Carradine was born in Hollywood. His father was the actor John Carradine, and his mother was Ardanelle Abigail McCool. He had two half-brothers, Robert Carradine and Keith Carradine.

He did two years military service then worked in New York as a commercial artist. His interest in acting had ignited at college, and he pursued his interest. He worked on Broadway and early on appeared in Royal Hunt of the Sun (1965) as an Inca chief alongside Christopher Plummer. He then had a breakthrough when he was cast in the starring role in the Western television series Shane (1966) based on the book Shane (1949) by Jack Schaefer. A film of the book had been made in 1953. Carradine played the title role of an ex-gunfighter and outlaw who was employed on a ranch by a widow, her father, and young son. Between the 10 September, 1966 and the 31 December 1966, the show ran for 17 episodes.

His career was in the doldrums for a while before it was reignited when Quentin Tarantino cast him as  the crime thriller Kill Bill Vol.1 as well as Vol. 2 starring Uma Thurman (2003-2004)

As a musician and singer, Carradine recorded an album Grasshopper (1975) and his music featured in Bound For Glory, Americana and Sonny Boy.  His brother Robert also played music, and they sometimes performed together.

His first wife was Donna Lee Becht (m.1960-div.1967) with whom he had one child. Between 1969-1975, he was in a relationship with Barbara Hershey, and they had a son, Tom Carradine, together. In 1977, he married Linda Gilbert, and they had one child before divorcing in 1983. His third wife was Gail Jensen (m.1988-div.1997), his fourth wife, Marina Anderson (m.1998-div.2001) and his fifth wife was Anne Bierman whom he married in 2004 and was still married to at the time of his death.  His autobiography Endless Highway was published in 1995. David Carradine died in Bangkok of accidental asphyxiation on the 3 June 2009.