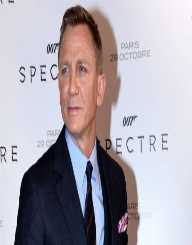 Daniel Craig was born on March 2nd, 1968. His place of birth was in Chester, U.K. At the tender age of 16 years, he shifted location and went to London where he joined National Youth Theatre. His first movie appearance came in 1992 with The Power of One. He also featured in Our Friends in the North which was a BBC miniseries.

In his film career, Daniel has also worked with Steven Spielberg, director. This was in the Munich movie. He went on to play James Bond in the film Casino Royale. After this, there have been several Bond series that he has featured in, including Skyfall, Solace, and Spectre.

Daniel Craig is the son of Timothy John Wroughton Craig and Carol Olivia. His mother was an art teacher while his father ran his pub businesses. Before this, Wroughton had been employed to work as a midshipman in the Merchant Navy. Craig had an early urge to act since a good number of her mother’s friends were in the acting field.

When he was 16 years old, he shifted locations and went to London to pursue his acting career. He enrolled in the National Youth Theatre. Later, he also went for his studies at the Guildhall School of Music and Drama.

Soon, after his graduation, Daniel Craig made his first on-screen appearance in the movie The Power of One which was released in 1992. Four years later, his career was given a massive boost by acting in the BBC miniseries named Our Friends in the North. This miniseries was well received by his audiences, and it earned several awards including 2 British Academy Television Awards, 2 Royal Television Society Awards and 4 Broadcasting Press Guild Awards.

Daniel Craig landed a vital screenplay in Love Is The Devil (1998). Later that year, he also featured in another drama Elizabeth while playing the role of John Ballad. A few years then in 2001, he played Alex West in the film Lara Croft: Tomb Raider. This was one of his first hits during this time. This movie went on to be ranked as box office No. 1. In addition to this, it was taken for video game adaptation which was later classified as the highest-grossing of all times.

A road to Perdition came in 2002 after the story being developed from the novel with its same name. He gained a large number of followers through his brilliant performance in the film. He later switched to drama in 2003 by featuring in Sylvia.

In 2005, he managed to work with a famous director named Steven Spielberg. This time he was working on Munich ­- 2005.

Soon, Daniel Craig joined the likes of Sean Connery and Pierce Brosnan as he was considered to play the role of James Bond. At first, people were skeptic about this claiming that he was too old and blond. However, he proved them wrong with the record-breaking movie Casino Royale (2006). He had surpassed the Bond record by making Casino Royale become the highest-grossing movie to this date. The film earned approximately $600 Million globally.

His success in his first Bond series landed him the second sequel in Quantum of Solace (2008). The movie also performed well but not as good as compared to his first Bond debut.

In 2012, Skyfall was released, and Craig was the star. This acclaimed project hit the headlines as it was out of the ordinary. It earned over $1.1 billion globally. Three years later, in 2015, Spectre was released as another Bond series. This was a significant hit in the UK. In 7 days, it had become the highest ever grossing movie. Surprisingly, the preceding record holder was Skyfall.

After marrying Fiona Loudon in 1992, they had a daughter, Ella together. Later, the couple separated in 1994. In June 2011, Daniel Craig got married again to actress Rachel Weisz.