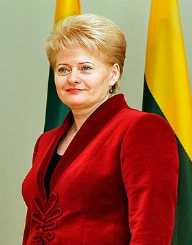 Also Known For : President Of Lithuania

Dalia Grybauskaite was born on the 1 March 1956 in Vilnius.

Dalia Grybauskaite did her schooling at Vilnius Salom?ja N?ris Secondary School followed by a degree in political economy from Leningrad University in 1983. In 1988 she was awarded a doctorate in economics from the Moscow Academy of Public Sciences. She did a six-month programme for senior executives at Georgetown University in Washington in 1992. And in 1993 the Research Council of Lithuania awarded her a doctorate in social sciences.

Dalia Grybauskaite worked at the Academy of Sciences as a scientific secretary in 1983. From 1983 until 1984 she was head of the agriculture division at Vilnius High Party School and from 1985 until 1990 worked as a lecturer at the Department of Political Economy.