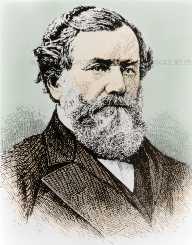 Cyrus McCormick was born on February 15, 1809, in Shenandoah Valley, Virginia, USA. His parents were Mary Ann (Hall) and Robert McCormick. He also had seven siblings.

As a child, Cyrus McCormick had grown up watching his father work towards inventing a new type of crop reaper. However, his father also gave up on the invention before he finished it. In 1831, Cyrus McCormick picked up where he left up. He finished the first model of the device later the same year and showed it off. For the next few years, Cyrus McCormick worked on improving his device. In 1834, he updated it enough to patent it. However, the machine did not sell well, or at all. It had problems working in certain types of weather and on various terrains.

In 1837, the McCormick family was faced with difficulty, Their iron foundry went out of business, leaving the family with mountains of debt. With the lack of money coming from the family foundry, Cyrus McCormick was determined to focus on the one thing he believed he could save the family from the poorhouse: his crop reaper. He worked on upgrading it. He sold his first crop reaper the same year. Sales went up for the next few years.

In 1845, Cyrus McCormick decided to improve his machine once again. While working on new designs, he also opened up a factory to make the crop reapers faster. The machine would later be named the McCormick Harvesting Machine Company. However, as he tried to release a new patent for his machine in 1848, the patent was denied. Early in the same year, another inventor had patented the similar machine. McCormick took the new inventor to court. It was later ruled that the basic version of the machines (as they were both extremely similar) would be put into the public domain, meaning anyone could use the design.

After not exactly winning the legal battle, Cyrus McCormick knew he had to think of new ways to draw in customers. He started advertising more. He also started to make more of his machines so he could sell them at a lower price. Throughout the 1850’s to 1860’s, the machine was a hit. Then, tragedy struck.

In 1871, the McCormick Harvesting Machine Company burned down. He rebuilt a new factory in 1873. This factory was bigger and better than the one before. He worked in his factory throughout the 1870’s, all the while, expanding his business. However, he retired in 1880, passing down his business to his son, Cyrus Jr.

All of McCormick’s awards and accomplishments are related to his crop reaper and the way he improved agriculture in the United States and around the world. Some of his most prestigious awards are listed below.

Cyrus McCormick was elected to the French Academy of Sciences in 1878.

The Cyrus McCormick Farm is a piece of land which was donated to Virginia Tech. A free museum here is open to the public.