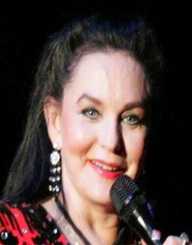 Crystal Gayle is a Country Singer, and first female country music artist to reach platinum sales. She is also famous for her floor-length hair.

Crystal Gayle was born on 9th of January 1951 as Brenda Gail Webb, to parents Clara Marie and Melvin Theodore Webb. Her mother had Native American Cherokee heritage. She is the youngest child of ten born and eight surviving, and the younger sister of another famous country singer Loretta Lynn.

Crystal Gayle was born in Paintsville, Kentucky before the family moved to Wabash, Indiana when she was four.

In Indiana, Crystal Gayle was inspired by older sister Loretta’s success and learned the guitar to perform folk songs at school. Crystal studied at Wabash High School, graduating in 1970.

By then Crystal Gayle had experience singing as backing vocals in her brother’s band and singing with her sister in tours during summer. She did not further her studies after high school

With her sister Loretta Lynn’s help, she signed with Decca Records. As they already had a singer named Brenda Lee, she changed her name to Crystal Gayle after her sister saw a sign for the Krystal Hamburger chain.

Wrong Road Again in 1976 was her first Top Ten Country Hit, followed by her first number one single: I’ll Get Over You. Under the encouragement of producer Allen Reynolds, she recorded a jazz-flavored pop titled Don't It Make My Brown Eyes Blue; the song was the break that Crystal needed to separate herself from her sister’s shadow.

From the success of Crystal Gayle first album, the second one: We Must Believe in Magic allowed her to become the first female country artist to reach platinum. After a few successful releases, she switched labels to Elektra Record.

Crystal Gayle first was a duet, You and I, with Eddie Rabbit for his album. The duet allowed her first album with Elektra, True Love, produced three number ones.

In 1983, Elektra Records merged with Warner Bros. Records. She released Cage the Songbird with the new record. She released Crystal Gayle Sings the Heart & Soul of Hoagy Carmichael in 1999, a tribute project.

Crystal since ran a shop selling fine jewelry in Nashville. In total, Crystal has thirty-six albums, including the children’s songs, In My Arms in 2000.

Crystal Gayle had her prime time television specials, as well as hosting concerts and Christmas.

Crystal Gayle had won six major awards for the top female vocalist. She won the 1978 Grammy Awards for the best female with Don’t Make My Brown Eyes Blue. Crystal was inducted into Hollywood Walk of Fame in 2007, and Grand Ole Opry in 2017.

Crystal Gayle married high school sweetheart, Bill Gatzimos in 1971. They have two children together, and a grandson Elijah.