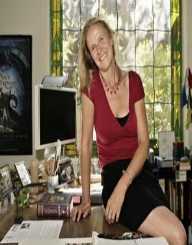 Cornelia Funke is a German novelist who is best known for her work in children’s fiction which earned her the nickname ‘The German J.K Rowling.’

Funke was born on 10 December 1958 in Dorsten, Germany. Her parents were Karl-Heinz Funke and HelmiFunke. Funke attended her local school and wanted to be a pilot. However, she studied pedagogy at the University of Hamburg. She graduated in 1979 and began work as a social worker. She worked mostly with disadvantaged children in her role as a social worker. Funke also had a job illustrating children’s books. This inspired her to start writing her own stories.

Cornelia Funke had a manuscript picked up by several German publishers in 1987. She became a huge success in Germany with the Ghosthunters series which was followed by the Wilde Huhner series. It was during this time that she gained her ‘J.K Rowling of Germany’ nickname. The first of her works to be translated into English was The Thief Lord in 2002. The book was published by Scholastic and follows the adventures of brothers Prosper and Boniface in Venice. The brothers live with some other children in an abandoned theatre. They steal and fence stolen goods to get by. The book was made into a film in 2006. Funke’s greatest commercial success came in 2004 as her novel Dragon Rider stayed on the New York best sellers list for a year and a half. Funke had originally written the novel in 1997. The book focuses on a dragon and a young boy’s search for a safe refuge for dragons to live in the Himalayas.

Funke next enjoyed success with her Inkheart series, the series is seen as her finest work. The series focuses on a father and child who have the power to bring things from books to life just by reading them. The second book in the series, Inkspell, was released in 2005. The concluding part of the trilogy, Inkdeath, was published in English in 2008.

Funke worked as a producer on the film adaption of Inkheart which was released in 2009. It also spawned a Nintendo DS game. Funke released the first part of her MirrorWorld series, Reckless, in 2010. The MirrorWorld series is inspired by the Brothers Grimm stories and is set in an alternative fantasy land reached through a magic mirror. The second installment, Fearless, was published in 2014 and the third book, The Golden Yarn, came out a year later.

Funke married Rolf Frahm in 1981. Together they have two children, Anna and Ben. Funke’s husband Rolf died in 2006. Funke lived in Hamburg for most of her life but moved to California in 2005.