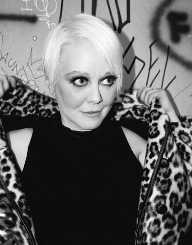 Cynthia Leigh Wilson is an American singer and songwriter. Born on February 28, 1957, she is one of the founding members of the band B-52s. Wilson served as both vocalist and songwriter of the band. Founding members of the group include guitarist Ricky Wilson and vocalist Fred Schneider. Others are drummer and percussionist Keith Strickland, and keyboardist Kate Pierson. In 1979, B-52s released an eponymous debut album comprising hit singles like Planet Claire and Rock Lobster. Aside from her band career, Wilson has also done some solo projects.

Cynthia Leigh Wilson was born on February 28, 1957, in Athens, Georgia. His elder brother is guitarist Ricky Wilson. Her father was a firefighter and stepmother a factory worker. Growing up, Wilson became highly attracted to music and enjoyed songs by the Playboys, Nancy Sinatra, Petula Clark, and Gary Lewis. Subsequent interests include works of the Beatles and Alice Cooper. In high school, Wilson performed as a vocalist and usually performed with her brother.

Following her graduation in 1975, Wilson, Ricky and their friends Keith Strickland, Fred Schneider, and Kate Pierson performed together. Cindy Wilson also worked as a waitress to support her music ambition.

On the night of October 1976, Wilson, Ricky, Pierson, Strickland, and Schneider shared a bottle of drink at a local Chinese restaurant. Following that, they played an unplanned musical session, and that gave birth to the B-52’s band. B-52’s was a Southern Slang term for a hairstyle within that period. Wilson is vocalist and songwriter of the band, Ricky as a guitarist, and vocalist Fred Schneider. Keith Strickland serves as drummer and percussionist, and Kate Pierson as keyboardist.

The band played its debut official performance at a Valentine Day party in 1977 for friends. Schneider recalls there were just about 17 people present. Subsequently, the group since played several weekend road trips. They performed at venues including CBGB in New York City and Max’s in Kansas City.

In 1979, Warner Bros signed B-52’s unto its label. That same year, the band released an eponymous debut album, which instantly shot them into stardom. The album contained hit charting singles like Planet Claire and Rock Lobster and sold about 500,000 copies.

After that immense success and popularity, they released Wild Planet in 1980. The album contained hit singles like Strobe Light, Give Me Back My Man, and Private Idaho. Later albums include Mesopotamia (1982) and Whammy! (1983).

Ricky died of AIDS in 1985. The death of Ricky plunged Wilson and other band members into extreme sorrow. According to her, Ricky did inform her about his illness. She was therefore taken by surprise when she received a phone call from the hospital about his dying brother. As a result, the band became inactive for a period. They, however, released the fifth album, Cosmic Thing in 1989. After the fifth album, Wilson decided to take a break from the band to concentrate on her family. While on break, the B-52’s continued to record. They also released the album Good Stuff in 1992.

Wilson returned from her hiatus in 1994 and rejoined the B-52’s. She recorded some of the songs for the album Time Capsules: Songs for a Future Generation. Wilson took a maternity leave in 1999. As a result, Gail Ann Dorsey replaced her for the band’s tour. However, she made a strong comeback in 2001. Wilson served as a co-writer for the songs on the album Funplex, released in 2007. In addition to her band career, Wilson has also done some solo projects. She released an EP, Sunrise, in September 2016 and Supernatural in 2017. That same year, she released a debut solo album, Change, on the Kill Rock Stars label.