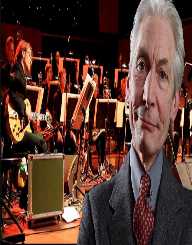 English drummer Charles Robert Watts was born on June 2, 1941, in London. His father was a driver for Midland & Scottish Railway. He and his sister Linda were raised in Kingsbury. In 1952, Watts started to attend Tyler’s Croft Secondary Modern School. He was good at art, cricket, and football.

When he was a child, his family lived on the Pilgrims Way in Wembley. Most of the area’s houses were destroyed during the World War II. One of his neighbors and childhood friends was Dave Green, who went on to become a jazz bass player. Around the time when Watts was 13, he became interested in drumming. His parents gave him his first drumming kit in 1951.

After secondary school, Watts enrolled in Harrow Art School and attended it until 1960.

In 1958, Charlie Watts and Green started to play jazz together in a band called the Jo Jones All Stars. The group performed together until 1959. In 1960, he began working as a graphic designer for advertising company Charlie Daniels Studios. Watts occasionally played drums with local bands in various locations. In 1961, Watts was supposed to go work as a graphic designer with his company in Denmark. But he was approached by Alexis Korner, who offered him to join his band Blues Incorporated as the drummer. Watts accepted the offer and went to London to play with the group.

With Blues Incorporated, Watts was able to play regularly. He also had another job with an advertising company Charles, Hobson and Grey. In mid-1962, Watts met Brian Jones, Ian Stewart, Mick Jagger and Keith Richards. They were all frequent artists in the clubs of London. In 1963, Watts agreed to join the Rolling Stones.

At the beginning of his work with The Rolling Stones, Charlie Watts thought about it as just another job. Only a year later, the band reached Britain’s chart tops with their cover of Bobby Womack’s It’s All Over Now. A year later, the band reached the top of the U.S. charts with their single (I Can Get No) Satisfaction. Since then, the group experienced major success throughout decades.

Besides playing drums, Watts also designed the graphic art for Rolling Stones records. Together with Mick Jagger, he made the stage design for their tours, the latest being A Bigger Bang Tour.

Outside Of The Rolling Stones

Besides his work with the band, Charlie Watts has taken up many other activities. In 1964 he published a cartoon Ode to High Flying Bird - a tribute to Charlie Parker. He also organized a tribute jazz quintet in his honor, in 1991. Watts made his fame with one of the greatest rock bands of all time, but he still has the love for jazz.

The Charlie Watts Quintet released an album in 1993, and another one in 1996. The records are included in the collection of Great American Songbook Standards.

The Rolling Stones were introduced into the Rock and Roll Hall of Fame in 1989. In 2006, Watts joined the Modern Drummer Hall of Fame. Watts has often been named the rock’s most celebrated drummer.

In 1964, Charlie Watts married Shirley Ann Shepherd. While other members of The Rolling Stones were making their reputation as the rock and roll’s bad boys, Watts was interested in settling down. In 1968, the couple had a daughter Serafina. Watts has one grandchild, Charlotte.

He has been faithful to his wife all his life, and on many occasions has refused sexual encounters with groupies. Even when the band was invited to Hugh Hefner’s Playboy Mansion, he spent his time in Hefner’s game room, instead of spending time with the women.

In the mid-1980s he developed major issues with alcohol and drug abuse. His behavior almost led to his divorce, but in 1986, Watts got his act back together.

In 2006, Watts was named one of the World’s Best Dressed Men. He was also added to the International Best Dressed Hall of Fame.

Charlie Watts was diagnosed with throat cancer in 2004. He had quit smoking in the 1980s. He received a course of radiotherapy, and since then, cancer has gone into remission.