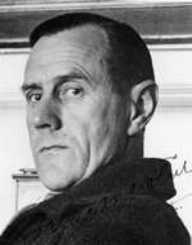 Patrick White was born 28th May 1912, to Victor and Ruth White. His parents were Australians, of English background. White was born in London, but the family returned to Australia when he was six months of age.

As a young boy, White, along with his sister and their nanny, lived in an adjoining flat to the one his parents lived in. When he was four, White developed asthma. His grandfather had died from the disease, and Patrick White’s health was precarious as a youngster. Because his health was so fragile, it stopped him taking part in many activities.

Patrick White’s mother took him to the theater when he was six, and he fell in love with it.

When he was ten, White was enrolled in a boarding school, called, Tudor House School. It was located in the Southern Highlands of New South Wales, in Australia. It was thought the location might help with his asthma. It took Patrick White time to adjust to the school, which he did. He also started writing plays during this time.

The boarding school ran into financial difficulties, and the principal encouraged White’s parents to send him to a school in England, which they did. Unfortunately for Patrick White, he didn’t adapt to his new school environment, and became somewhat of a recluse, with only a very small circle of acquaintances. He did make one friend, however, White,  Patrick White was older than White, but the boys shared similar interests and would attend London shows together.

Once  Patrick White left school, White became isolated again. He requested permission to leave school and become an actor. His parents said he could leave school on the proviso he moved back to Australia to try a life of farming. The next two years were spent working as a stockman. Although his health improved, and he grew to respect the country, it was evident to White that he was not suited to a life on the land.

White lived in England from 1932 to 1935. He studied French and German literature at King’s College, Cambridge University. In 1935, White began his Bachelor of Arts degree. While he was at Cambridge, White published a collection of poetry and also wrote a play, called, Bread and Butter Women.

In 1937,  Patrick White's father died. White was left an inheritance of ten thousand pounds, and this enabled him to concentrate on his writing full-time without having to worry about income. He wrote two more plays, and then found a publisher for his novel, Happy Valley, that he had also re-worked during this period.

White moved to the United States for a short time in the 1930s, spending time in New York City, and also Cape Cod, Massachusetts. These areas were known for the artistic communities at the time.

When World War II erupted, White was back in England, and he enlisted in the Royal Air Force. He was posted in the Middle East as an intelligence officer, serving in countries like Egypt, Palestine, and Greece. During his tenure in Greece, he met Manoly Lascaris, who would become his life partner.

In 1948,  Patrick White, bought a farm at Castle Hill, near Sydney. Prior to that, White and Lascaris had lived in Cairo for six years. When White’s mother died in 1963, they moved into a larger house called, Highbury, which was located in Centennial Park. They lived there for the rest of their lives.

During these years,  Patrick White continued to write and started to make a name with his work. Although he became very well-known in the United States and the UK, success still eluded him in Australia.

Patrick White finally had success in Australia with his novel, Voss, for which he won the Miles Franklin Literary Award in 1957. He won the award again in 1961 with his next novel, Riders in the Chariot.

Patrick White had established himself as one of the greatest writers in the world by this stage but didn’t do interviews or public appearances due to his being such a private person. He also decided he wouldn’t accept any further prizes for his work, turning down both the Britannia Award, worth $10,000 and another Miles Franklin Award.

During his career,  Patrick White wrote many works. He published 12 novels, and another was released posthumously. There were four short story collections, a collection of poetry, 11 plays, a screenplay, and, of course, his autobiography, Flaws in the Glass.

Among the awards and honors that  Patrick White, accepted, are the following:

Patrick White, have been named in his honor, near the National Library of Australia, in Canberra.

The other legacy is from  Patrick White, himself. He used his Nobel Prize money to create the  Patrick White, Award, which is awarded each year to established writers who receive little recognition.