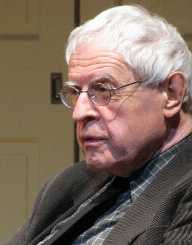 Charles Simic was born on May 9, 1938. He is a renowned Serbian American poet. He was also a co-poetry editor of the Paris Review. He was inclined towards literature from a very young age. He started reading poetry while he was still in school. He has faced the effects of two global wars, but he made it in his career. He wrote a few books on literature which were well received, and so he became widely recognised in the world of literature. He received the Pulitzer Prize for poetry in 1990 for his poem ‘The World Doesn’t End.’ In 2007, he was appointed the 15th Poet Laureate Consultant in Poetry to the Library of Congress.

Charles Simic was born Dusan Simic on May 9, 1938, in Belgrade in the Kingdom of Yugoslavia. He was born into a world that was filled with a war that when he was a child, his family was almost killed by bombs on several occasions. At the age of four, his father immigrated to Italy and left them behind. The family saw their father again after ten years. At the age of fifteen, his mother managed to get the family to Paris, France. When he was sixteen, his family immigrated to the United States of America. He later enrolled in Oak Park High School, Chicago where he began studying poetry.

In 1958, Charles Simic left Chicago and moved to New York City. He studied at night and during the day he would do several menial jobs to sustain himself. In 1959, he had one of his poems published in the Chicago Review. In 1960, he enrolled at the University of Chicago. In 1961, he joined the American military where he served for two years during the build up in Vietnam. During his tours in Germany and France, he worked as a rule enforcer.

In 1966, Charles Simic graduated from the University of New York with a Bachelor of Arts Degree. After graduation, he started writing poems in his native language, but as time went by, he started writing the poems in English. He was also a translator of poems written by other Serbian and Yugoslav writers. He began working as well as an assistant to the editor of a small magazine that contained photos known as ‘Aperture.’ In 1967, he published his first collection of poems ‘What the Grass Says.’ In 1969, he published his second collection of poems ‘Somewhere among us a Stone is Taking Notes.’

In 1971, Charles Simic published his third collection of poems ‘Dismantling the Silence’. His talent was recognized by some critics, and he was hired as a teacher in the Hayward Campus of California State College. He worked as a teacher at the institution for two years. In 1973, he resigned from his position at the institution for a position of an associate professorship at the University of New Hampshire, Durham. Currently, he is still working at the university, and he is a professor emeritus of American Literature and creating writing.

In 1977, Charles Simic published ‘Charon’s Cosmology.’ This collection of poetry was nominated for a National Book Award. In his career, he went ahead to publish sixty more books. The books included collections of his poems, translations of poems written by Serbian and Yugoslav writers and collections of prose writings. In 2015, he published ‘The Lunatic’ and ‘The Life of Images’ which was a book of collected works of prose.

In 1990, Charles Simic won the Pulitzer Prize for Poetry for his work ‘The World Doesn’t End.’ He also won awards such as The Wallace Stevens Award, The Zbigniew Herbert International Literary Award, The Frost Medal and a PEN Translation Prize. He also received various fellowships such as The Ingram Merrill Foundation Fellowship, MacArthur Fellowships (5), The Guggenheim Fellowship and a Fellowship from the National Endowment for the Arts.

In 1964, Charles Simic married Helen Dubin with whom he has two children. He is fluent in English, French, Serbian, Macedonian, Slovenian and Croatian.