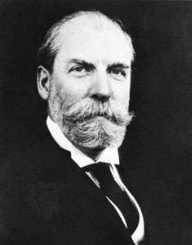 American Republican politician and Chief Justice Charles Hughes was born in Glens Falls, New York in the USA on the 11 April 1862. His parents were Welsh-born David Charles Hughes,  a Baptist minister and Mary Connelly Hughes.

He practiced law in New York City (1884-1904) for twenty years. During this time, he also taught law at Cornell University.

Hughes was elected governor of New York in 1905 and won re-election in 1907. Then the next step in his career was his appointment to the Supreme Court of the US in 1910. He ran for president as the Republican Party candidate in 1916 but lost to Woodrow Wilson. After this loss, he returned to practicing law in New York City until he became Secretary of State (1921-1925). He was a US delegate at the Permanent Court of Arbitration in the Hague (1926-1930), and in 1930, Hughes became  Chief Justice of the US in 1930. As Chief Justice, he also served as Chairman of the Judicial Conference from `1930 until his retirement in 1941.

In 1988, he married Antoinette Hughes, and they had four children together, three sons and a daughter. Charles Hughes died on the 27 August 1948.