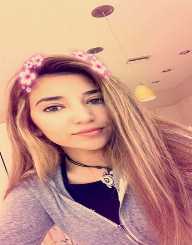 Catalina Selman was born on March 12, 2001, in Florida. She currently studies at the Seacrest High School in South Florida. Selman also has a sister Nacha and brother Mario. The young girl began to rise to stardom on social media site musical.ly in 2016 when she began posting her music videos.

The young and beautiful Selman quickly acquired a major fan base. She often chooses a wide variety of different songs to lip-sync to, which makes her profile even more interesting. This has allowed young Selman to acquire more than 1 million fans on musical.ly.

The charismatic and charming teenager has not only acquired a major fan base on musical.ly but has also joined Instagram. Her profile catselman has more than 500,000 followers.

Selman is also interested in modeling and cheerleading. She has also launched her YouTube channel, which continues to generate more and more interest. She and her brother Mario, who is also famous on several social media sites, have collaborated on several videos.