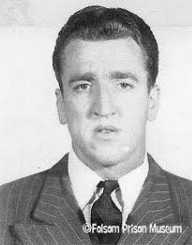 The convicted robber and rapist Caryl Chessman was born Carol Whittier Chessman the 27 May 1921 in St Joseph, Michigan to Serl Whittier Chessman and Hallie Cottle. When he was an infant, the family moved to Glendale in California where he was raised.

Caryl Chessman was brought up in a religious household, and when he was a teenager, he turned rebellious. During the Depression years, he turned to petty crime and would steal food. After being convicted of attempted auto theft, Chessman was sent to a reform school.

He was released in April 1938 but continued stealing and in October 1939, was sent to the Los Angeles Country Road Camp. Around this time he got involved with the Boy Bandit Gang and by 1941, was arrested on some occasions for gang-related crimes.

Chessman was sent to San Quentin Prison and later to the California Institution for men in Chino. Eventually, he was sentenced to five years in Folsom State Prison. He was released in 1947.

Then in 1948, Caryl Chessman was arrested and charged with being responsible for a series of robberies, rapes and two charges of kidnapping in the Greater Los Angeles area.

The authorities claimed that he was the Red Light Bandit who impersonated police officers by tricking motorists into pulling over in secluded areas and exiting their vehicle. He would then rob and in the cases of some young women, rape them.

After his arrest, Chessman was indicted in January 1948 on 18 charges of rape, robbery, and kidnapping. He was convicted of 17 accounts in May 1948 and received the death sentence.

There was controversy surrounding the sentence because of the application of the Little Lindbergh Law which stated that kidnapping causing bodily harm could be considered a capital offense. Caryl Chessman had dragged two women from their motor vehicles against their will and in one case, drove the victim a fair distance away.

At the time of Chessman’s trial, the Little Lindbergh Law had been repealed but was in place at the time of his crimes and could not be applied retroactively. Although he had signed a confession admitting to the crime and being the Red Bandit, at his trial and on appeal, he claimed to be a victim of mistaken identity.

The book A Thousand Suns by Dominique Lapierre deals with Caryl Chessman's life. The author, a journalist, visited Chessman in prison. Chessman was also the subject of a TV film, Kill Me If You Can which starred Alan Alda (1977). The controversy concerning the use of the Little Lindbergh Law and how it was applied in his case ignited the debate concerning the death penalty in California.

The books he wrote in prison became bestsellers and resulted in an international movement to save his life. Some authors wrote to the Governor of California pleading for clemency including Norman Mailer, Robert Frost, Aldous Huxley, and Ray Bradbury.

Caryl Chessman was executed by gas at San Quentin Prison, California on the 2 May 1960.