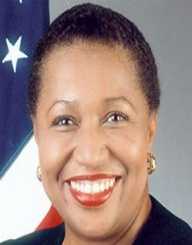 American politician Carol Moseley Braun was born on the 16 August 1947 in Chicago, Illinois to Eda Davie and Joseph Moseley. Her father was a policeman, and her mother worked as a medical assistant.

After finishing her education, Carol Moseley Braun worked as an assistant US attorney in Chicago (1973-1977). She was elected to the Illinois House of Representations (1973-1977) and became the first African-American woman to serve assistant majority leader. She then worked as the Recorder of Deeds for Cook County, Illinois becoming the first woman to hold an executive office in the county (1988-1992).

Carol Moseley Braun was elected to the US Senate in 1992 and made history by becoming the first African-American woman to do so. She was also the first woman to serve on the Senate Finance Committee (1993-1999). She was defeated in the 1998 Senate election by Republican Peter Fitzgerald. President Bill Clinton then appointed Moseley Braun the American ambassador to New Zealand and Samoa (1999-2001). Upon her return to the United States, she lectured at Morris Brown College. Then in 2003, she announced that she would be running for the Democratic nomination for president but dropped out on the 15 January 2004, and endorsed Howard Dean.

In the years after leaving politics, Carol Moseley Braun founded Good Food Organics, a certified USDA organic and biodynamic company in 2005. The Ambassador brand is part of the Good Food Organics holding company which focuses on social ethics and environmental sustainability as well as making a profit.

In 2011, Moseley Braun was a candidate for Mayor of Chicago but lost to Rahm Emanuel. She serves on the advisory board of Healthy Foods Campaign as well the National Organization for Women and is a member of the International Women’s Association as well as the Chicago Network.