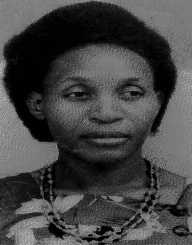 Kay Adroa Amin was the second wife of the Ugandan military ruler Idi Amin. Her mysterious and graphic demise caught the attention of the world.

Kay Adroa Amin was born and raised up in Paranga, Arua district in northern Uganda. She was the daughter of a respected Christian clergy Reverend Adroa. Coincidentally, Idi Amin was also from the same locality. She got her elementary and secondary education in Arua before moving to Kampala. She enrolled at The University of Makerere, the only university at the time.

Kay Adroa met the Ugandan president while she was a student at the university. Reverend Adroa and Idi Amin were longtime friends. With the affirmation of her father, she got married to Idi Amin. In 1966, the ceremony was conducted at the civil marriages registrar. The two were from different religious backgrounds. The wedding party and reception feast took place in their home district of Arua. As expected the event was well graced. Kay was married four months after Malyamu.

Within no time, Amin took in another wife. Even then, Kay was the favorite. She accompanied the president on many occasions. Young and intelligent, she was the charming figure next to the military dictator. The good relationship soured when Amin took in his fourth wife, Madina. Kay was relegated to the periphery. The first three wives opted to confront the president. They held a party in one of the presidential homes in Kampala against his consent. This irritated the president. When he asked them about their disobedience, they told him off.

On March 26, 1974, Idi Amin divorced all the three wives through the national television broadcaster. The Reverend Adroa prevailed on the president to rescind his decision on Kay. Amin obliged and took her back as his wife. This time it was just a marriage of convenience.

The second reunion with the president was not rosy. It is believed that she was already romantically involved with a Kampala pathologist Dr. Peter Mbalu Mukasa. Mukasa was one of the leading pathologists in Uganda, married with seven children. The affair blossomed and Kay got pregnant by the doctor.

When the president got suspicious, his intelligence yielded nothing much. Kay was too careful not to leave any tracks. In a move that alienated the President from his wife, Kay was arrested at the beginning of 1974. She was charged with being in possession of an illegal firearm. She successfully cleared herself of the charges by proving that the pistol belonged to her husband the president.

On August 13, 1974, Dr. Peter Mukasa was pronounced dead at the Mulago Hospital. The cause of death was given as suicide. Most of his colleagues suspected foul play. The following day August 14, 1974, the Ugandan nation woke up to the most shocking news. Kay Amin was dead. Her dismembered body had been found in the car belonging to the late Dr. Mukasa. The body had been chopped off its limbs with a surgeon’s precision. The hands were cut off at the shoulder joints and the legs at the hip joints. Only the torso remained intact. She was buried in her hometown of Arua.

Two theories came to the fore. One was that Dr. Mukasa had killed her. He procured an abortion that went wrong. Kay bled to her death. Fearing the president’s repercussion, he mutilated the body to cover up his crime. When he could not dispose of the body, he committed suicide.

The second narrative was that Idi Amin killed the two. The mutilation was done to implicate the doctor. His demeanor was also unusual. This came after the manner in which the president handled the aftermath of Kay’s death. He took the Adroa family to the mortuary to view the dismembered body. In the delegation were his three young children with Kay. Even after the mysterious circumstances surrounding his wife’s brutal death, no formal investigation was launched. The media was reportedly forced not to mention anything concerning her. Most people pointed fingers at the president, but none dared do it in public.

The factual truth is Kay Amin was murdered in cold blood. The autopsy revealed that she died two days earlier. How could the president’s wife disappear for two days without raising a security alarm?

Since most of the actors in the saga are almost all dead, nothing much will be known about Kay Amin’s death. It still puzzles people now as it did then.