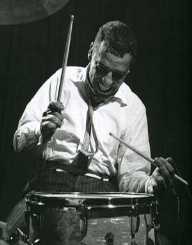 Buddy Rich was an American musician who is best known as a jazz drummer and being recognized as the best drummer in the world during his career.

Buddy Rich was born on 30 September 1917 in Brooklyn, New York. His parents, Robert Rich and Bess née Skolnik, were both vaudeville performers. As early as age one Rich’s father noticed that his son had an understanding of rhythm. At just eighteen months old Rich was incorporated into the vaudeville act with his parents as a drummer. It was claimed that only Jackie Coogan, the actor from Charlie Chaplin’s The Kid, was earning more money than Rich as a child star at the time. Rich was particularly proud of the fact that he never received any training nor could he read music. He would also claim that he did not practice and only ever played the drums at live performances. He toured Australia and American Samoa while still a child.

Buddy Rich was playing in bands from the age of eleven, but he gained real fame as a musician in his twenties when he entered the jazz scene. Rich played with Joe Marsala and Jack Lemaire in 1937 and joined a group led by Artie Shaw in 1939. While playing with Artie Shaw’s group Rich taught a young Mel Brooks, the future comedian, and filmmaker, how to play drums. Rich teamed up with Tommy Dorsey for the first time in 1938 and would collaborate with Dorsey a lot during the 1940s. It was in Dorsey’s orchestra that Rich met Frank Sinatra. Rich stalled his music career when he joined the Marine Corp in the United States military. However, he was soon dismissed on medical grounds within two years and despite World War II raging at the time never saw combat. He returned to play with Tommy Dorsey.

Rich received financial backing from Frank Sinatra in 1946, to form his band. However, Rich never stayed long with the one act and was continuously collaborating with different artists. He performed with the well renowned, Thelonious Monk, and other famous stars like Charlie Parker and Dizzy Gillespie in 1950. Rich would also appear on TV and sometimes performed on The Steve Allen Show. One of Rich’s longest collaborations was with the trumpeter, Harry James. 1966 saw Rich again form his big band; it was with this band that he performed his best-known act the West Side Story Suite.

Rich continued to enjoy success in the 1960s despite the big bands going into decline as Rock and Roll took over. Rich maintained his success from mostly performing in Colleges and Universities rather than the clubs that the big bands had dominated in the 1940s. Rich continued to be a feature on television and was a guest on The Tonight Show in America and Parkinson in the UK. Rich gave a live performance on PBS in 1973, and it was this that gained Rich the most recognition for his musical talent. He performed a drum battle on The Muppet Show in 1981, facing off against the resident Muppet drummer Animal.

Rich was also famous for having enraged outbursts backstage and frequently threatening to fire his bandmates. Secret recordings were made of these outbursts by Rich’s pianist Lee Musiker. The release of the tapes added to the fame of Rich and comedians would quote his rants. Despite these rants, Rich would always big up his bandmates in public and on television. He also featured as the drummer on recordings for Louis Armstrong. Many drummers have claimed to have been influenced by Rich these include, Led Zeppelin’s John Bonham, The Clash’s Topper Headon and Phill Collins of Genesis.