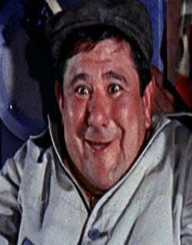 Buddy Hackett was an American comedian and actor. Born on August 31, 1924, he is best known for his role as Marcellus Washburn in The Music Man in 1962. Hackett played Benjy Benjamin in It’s a Mad, Mad, Mad, Mad World, 1963, and Scuttle in The Little Mermaid in 1989.

Buddy Hackett was born Leonard Hacker on August 31, 1924, in Brooklyn, New York to Anna (née Geller) and Philip Hacker. His father was an upholsterer and inventor. He was raised in 54th and 14th Ave in Borough Park, Brooklyn. Growing up, he suffered Bell’s palsy, which affected his speech.

Hacker received education at New Utrecht High School, graduating in 1942. With his keen interest in entertainment, he performed as Butch Hacker in nightclubs in the Catskill Borscht Belt resorts while in school. During the World War II, he enlisted in the US Army, serving in an anti-aircraft battery.

After the war, Hacker started performing at a Brooklyn club called the Pink Elephant. It was during this period that he changed his name to Buddy Hackett. He continued performing at Catskills and made some appearances in Las Vegas and Los Angeles. He then earned a role on Broadway, playing in Lunatics and Lovers. Hackett made a film debut in Columbia Picture’s King of the Pins in 1950. His next film was three years later in the Universal-International musical, Walking My Baby Back Home alongside Janet Leigh and Donald O’Connor.

Buddy Hackett started drawing much attention with his appearances as a guest on various television talks shows hosted by Arthur Godfrey and Jack Paar in the 1050s and 1960s. He frequented the Jack Paar and Johnny Carson versions of The Tonight Show, appeared as a guest on CBS-TV’s What’s My Line? and a filled in emcee for Treasure Hunt. From 1955 to 1961, he made about 15 appearances on the NBC’s The Perry Como Show. Hackett appeared with Lenny Bruce on the Patrice Munsel Show from 1957 to 1958.

From 1956 to 1957, Buddy Hackett appeared as the title character of the Max Liebman produced NBC comedy, Stanley, which ran for 19 Weeks. The comedy, which was shown for half an hour on Monday evening at 8:30 pm ET also featured Carol Burnett. He appeared in Broadway in I Had a Ball and followed it with the film adaptation of The Music Man in 1962. In 1963, Hackett appeared in It's a Mad, Mad, Mad, Mad World and as Tennessee Steinmetz in Disney’s The Love Bug in 1969. He guest starred in episode Buddy Hackett in LateLine in April 1998

Buddy Hackett received a star on the Hollywood Walk of Fame for his contribution to the motion picture. He also has a Golden Palm Star on the Palm Springs, California, Walk of Star.

Buddy Hackett married Sherry Cohen on June 12, 1955. The couple had a son, Sandy Hackett, who followed his father’s footstep in comedy. Hackett and Cohen established the Singita Animal Sanctuary in San Fernando Valley, California in 2003. He was a firearm collector. Hackett refused to undergo bypass surgery after being diagnosed with a severe heart attack in the 1990s. He died on June 30, 2003, at his home in Malibu, California at age 78. His remains were cremated, and ashes share among family and friends.