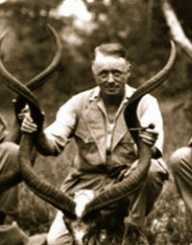 Bror Von Blixen- Finecke was born on July 25, 1886. He was a Swedish writer, baron, and a hunter. She was an African big game hunter. He lived for twenty-five years in Africa before he returned to Sweden.

Bror Von Blixen- Finecke was born on July 25, 1886, to an aristocratic Swedish family. He had a twin known as Hans who died in 1917 in a plane crash.

Bror Von Blixen- Finecke ran a firm of safari guides in Africa. One of his clients at the firm was Edward the Prince of Wales who enjoyed his hunting skills. He was a writer, and in 1938, he wrote the book ‘African Hunter’ in Swedish which was his autobiography. The book was later translated to English by F. H. Lyon. He was a good white hunter, and he was acknowledged by many even the native hunters of Africa. His character was featured in the movie ‘Out of Africa.’ His character in the movie was played by the Austrian actor Klaus Maria Brandauer.

In 1914, Bror Von Blixen- Finecke married Karen Dinesen in Kenya. They established and ran a coffee plantation on behalf of his wife’s family. In 1925, they divorced. In 1928, he married Jacqueline Harriet Alexander who was a British aristocrat. In 1932, he started an affair with Eva Dickson who visited him while his wife was in England.

In 1935, he and Harriet divorced. In 1936, he married Eva in New York City, United States of America. They spent their honeymoon sailing around the Bahamas and Cuba. In 1938, Eva died in a car crash outside Baghdad, and her death devastated Bror. In the same year, he left Africa and returned to Sweden. He died on March 4, 1946, of injuries sustained from a car crash. He died at the age of fifty-nine.