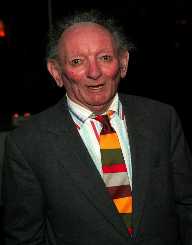 Brian Friel was a playwright and author from Northern Ireland.

Brian Friel was born in the town of Knockmoyle, Omagh, Northern Ireland, on January 9, 1929. His father, Patrick, was a primary school teacher. His mother, Mary, worked in the post office. He attended the grammar school St. Columb’s College in Derry. In 1948, he graduated from St. Patrick’s College in Maynooth. Two years later, he was qualified to become a teacher by St. Joseph’s Training College in Belfast. He soon started working as a math teacher in several primary and intermediate schools in Derry.

In 1958, Friel created his first two radio plays – A Sort of Freedom and To This Hard House. They were broadcasted by the BBC Northern Ireland Home Service. In 1959, he started writing short stories for The New Yorker. His first stage play, called A Doubtful Paradise, came in 1960. After that, he went on to write the plays The Enemy Within and The Blind Mice. All of his early plays achieved quite little success. During this time, he also wrote articles for the newspaper The Irish Press. They contained short stories, talks about his travels, his memories, and commentary on the political situation in the country.

In 1963, Brian Friel attended a six-month course at the Tyrone Guthrie Theater in Minnesota. He returned home, and the following year he wrote the play Philadelphia Here I Come. It achieved great success in Dublin, as well as London and New York City. It was adapted into a film years later. He then wrote the plays The Loves of Cass McGuire and Lovers. They were both successful in Ireland. Lovers was also successful in the United States, and it was adapted into an opera called Ballymore.

Friel soon started using political themes in his work. He released the plays The Mundy Scheme and Volunteers, which satirized the Irish government. In 1973, he published The Freedom of the City. It was based on Bloody Sunday, a real event where the British army killed 28 Irish people during a peaceful protest. It became one of the most famous plays during the crisis in Northern Ireland.

After that, left politics behind and started focusing on the relationships between family members. This earned him comparisons to the Russian author Chekhov. He wrote plays such as Living Quarters, Aristocrats, and Faith Healer. In 1980, he released the play Translation, talking about the joining of English and Irish culture. It was very successful, and it became one of the most translated plays in the twentieth century. The same year, he launched the Field Day Theatre Company with the actor Stephen Rea. He spent the rest of the decade translating and adapting plays and novels from different authors, including Chekhov.

In 1990, Brian Friel released the play Dancing at Lughnasa. It tells the story of a young boy who spent his summer in the cottage where his aunts lived. The play got a film adaptation, starring famous actress Meryl Streep. After this, Friel’s career slowed down. He released just a few more plays, including Three Plays After, Performances, and The Home Place.

Brian Friel received several awards for his work. In 1992, he won the prestigious Tony Award for Best Play for Dancing at Lughnasa. In 2006, he was inducted into the American Theater Hall of Fame. In 2009, The Queen’s University of Belfast opened The Brian Friel Centre for Theatre Research. He was appointed to the Senate of Ireland for his outstanding contributions to the arts.

In 1954, Brian Friel married Anne Morrison. They had daughters Mary, Judy, Patricia, and Sally, as well as son David.

Friel passed away on October 2, 2015, in the town of Greencastle in County Donegal. He suffered from a long illness, and he was 86 years old.