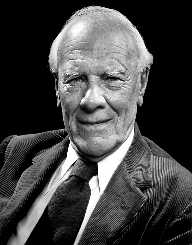 Malcolm Muggeridge was born on March 24, 1903.  He was an English journalist and author. He is popularly known for his works such as ‘A Third Testament,’ ‘The Earnest Atheist’ and ‘Jesus Rediscovered’ among others. He was also a teacher as he taught in India and Egypt.

Malcolm Muggeridge was born March 24, 1903, in South Croydon. He was born to Annie Booler and H. T. Muggeridge. He was brought up alongside four siblings. He attended Selhurst High School. He later joined Selwyn College. In 1924, he obtained a pass Degree in Natural Sciences. He taught English Literature in India and the John Ruskin Central School in Croydon. In 1927, he returned to Britain where he taught for a while. He later moved to Egypt where he taught English Literature for six months.

Malcolm Muggeridge started his career as a journalist with ‘The Guardian’ after a recommendation from Arthur Ransome. In 1932, he became a columnist with the ‘Manchester Guardian.’ In the same year, he wrote ‘Three Flats: A Play in Three Acts’. In 1934, he penned ‘Winter In Moscow’ and ‘Picture Palace.’ Two years later he wrote ‘The Earnest Atheist: A Study of Samuel Butler’. In 1940, his work ‘The Thirties’ was published. In the same year, he joined Corps of Military Police after the outbreak of World War II.

In 1946, Malcolm Muggeridge became the correspondent for the ‘Daily Telegraph’. In 1949, he wrote ‘Affairs of the Heart’. He also worked as an editor for ‘Punch Magazine’. In 1953, he became a television journalist for Panorama. In 1957, he wrote the introduction of ‘How Can you bear to be a Human’. The book was written by Nicholas Bentley. In 1969, he published his book ‘Jesus Rediscovered’. The book was a collection of sermons, articles, and essays on faith. In 1972, his autobiography ‘The Green Stick’ was published. In 1973, he published ‘Chronicles of Wasted Time’.

In 1975, Malcolm Muggeridge wrote ‘Jesus: The Man Who Lives’. In 1977, he wrote the book ‘Christ and the Media’.  In the 1980s he published the books ‘Conversion: The Spiritual Journey of a Twentieth Century Pilgrim’, ‘Like it was: The Diaries of Malcolm Muggeridge’ and ‘The End of Christendom’.

In 2008, Malcolm Muggeridge was posthumously awarded the Ukrainian Order of Freedom.

In 1927, Malcolm Muggeridge married Katherine Dobbs. In 1982, he and his wife converted to Catholicism. He died on November 14, 1990, in East Sussex, England. Some of his works that were published after his death include ‘A Third Testament’ and ‘Chronicles of Wasted Time: An Autobiography’.