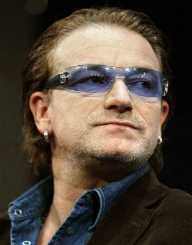 Bono born Paul David Hewson is an accomplished Irish musician, songwriter, social justice activist and businessman. Born on May 10, 1960, he is also a venture capitalist and philanthropist. Bono is known as the lead vocalist for the Irish rock band U2 and for engaging in several charity works. With his energetic and expressive voice and songwriting skills, he established himself as the frontman of U2.

Bono writes almost all the lyrics of the band with most of lyrics centred on social and political issues with a religious tone due to his Christian beliefs. The band has released albums since October, The Joshua Tree, and Rattle Hum. Along with the band, Bono has received 22 Grammy Awards and inducted into the Rock and Roll Hall of Fame. He has also done collaborative works with many artists including band, the Edge.

Bono has been a very expressive activist on social justice issues through U2 and personal means. He has been an active campaigner for Africa on poverty reliefs. He is a co-founder of One Campaign, DATA, Product Red and EDUN established for causes in Africa. Queen Elizabeth II has granted him an honorary knighthood and France made him a Commandeur of the French Ordre des Arts et des Lettres(Order of Arts and Letters) for his philanthropic works.

Aside from music, Bono is also a successful businessman with various stakes. He is the Managing Director and Managing Partner of Elevation Partners, a private equity firm.

Bono was born Paul David Hewson on May 10, 1960, in Dublin, Leinster, Republic of Ireland to Iris (née Rankin) and Brendan Robert "Bob" Hewson. He is the second son of his parents and was raised in the Northside suburb of Finglas. He started his education at Glasnevin National School, a local primary school. Hewson lost his mother at age 14 through a cerebral aneurysm.

Most of his future songs including Out of Control, I Will Follow, and Tomorrow are centred on his mother. He continued his education at Mount Temple Comprehensive School in Clontarf. During his youth days, he and other friends joined the surrealist street gang Lypton Village where he met Guggi who became a best friend. It is through Lypton that Hewson had his nickname BonoVox (good voice).

Bono along with his brother Dik Evans, David Evans (The Edge) and Adam Clayton joined the band “Feedback” by responding to an advertisement by Larry Mullen Jr. to form a rock band. The band which started by performing covers of other bands later changed its name to “The Hype.”Not good at performing covers, the band decided to write their own songs. The band finally became known as U2 with Bono initially serving as guitarist, singer and wrote the lyrics of the band. He admits being a lousy guitar player at the time.

Bono went to the singing position after The Edge improved in playing the guitar. As a songwriter, Bono writes almost all the lyrics of the band. His religious beliefs influence most of the lyrics and have on social and political themes. Songs like Gloria, I Still Haven’t Found What I’m Looking for among others are evidence of his religious connotations in lyrics. U2 released their first album Boy in 1980.

During the band’s early years, Bono’s lyrics were more of a rebellious and anguish style and that is evident in the studio album War. In 1987, the Provisional IRA paramilitaries threatened to kidnap Bono for speaking against the Enniskillen bombing on November 8, 1987. The incident saw 11 people dead and 63 injured. Supporters of the IRA later attacked a vehicle carrying U2 members.

The band changed their style beginning with the Achtung Baby album. That same year they released their first Grammy award-winning albumThe Joshua Tree. U2 has released albums like October, War, Rattle and Hum, Achtung Baby. Bono along with the band has won several awards including 22 Grammy Awards. He also has a Golden Globe award for the best original song, 2003. The US members were inducted into the Rock and Roll Hall of Fame in 2005.

Bono is not only into music but also into business. He is a co-owner of the Clarence Hotel. Bono and Edge bought the then 70-bedroom hotel in 1992 and renovated it into a five-star 49-bedroom hotel. He is a board member of the Elevation Partners, a private equity firm. Through the firm, he has invested in the Forbes Media group in the United States. The firm has 1.5% stakes in Facebook bought at the time form $210million. He has investments in the entertainment industry. Bono was mentioned in the Paradise Papers for an offshore investment to avoid tax.

Bono has been involved in charity works for years inspired by his Christian beliefs. With inspiration from Live Aid, he travelled with his wife and World Vision to Ethiopia for charity works. He is an activist for Africa and other developing countries on debt reliefs. He has met many world leaders and US politicians in that pursuit as well as on AIDS campaigns.

Bono has been married to Alison Hewson (nee Stewart) since 1982. They have four children, daughters Jordan and Memphis Eve and sons Elijah Bob PatriciusGuggi Q and John Abraham. Bono suffers from glaucoma. Hence, he is wearing sunglasses when outdoors.

Bono received an honorary doctorate of Law degree from the University of Pennsylvania in 2004. In April 2013, the Irish Post named him one of the 17 Irish artists to be proud of and that same year he was ranked 8th "Most Influential Celebrities" by the Time magazine. He received the Pablo Neruda International Presidential Medal of Hotel from the Government of Chile in 2004.